‘From beyond the stars shall come the Overmind and he shall crush the universe.’ So goes an ancient prophecy steeped in Stan Lee hyperbole. Super-heroes used to save America, then the world and later the galaxy from some terrible menace. Now it’s the universe. This shows that Stan didn’t know how big the universe is. A large chap with a strong brain isn’t going to conquer all of it. He wouldn’t have time. Never mind. The overlong ‘Overmind Saga’ is preceded by a couple of issues in which the Thing goes amok and then fights the Hulk, who is always amok anyway. No sooner is Ben Grimm returned to normal than the Watcher arrives to warn our heroes about the Overmind. He takes up four issues of their time, some of it scripted nicely by Archie Goodwin. Then Roy Thomas delivers an interesting tale in which the Thing and the Human Torch go to an African country which practices apartheid to rescue the Black Leopard, formerly the Black Panther. He changed his name (briefly) to avoid association with certain other people. The story makes its point without preaching.

Stan Lee returns to drag out another Galactus story for four issues, bits of which were perhaps used in the film ‘Rise Of The Silver Surfer‘. It was okay really but the sense of old yarns being rehashed is hard to dispel. The creature from the black lagoon – no, the monster from the lost lagoon, sorry – returns for another go and then Stan hands the scripting chores over to ‘Rascally’ Roy Thomas. The writing phase of Mister Lee’s fantastic, industry-changing career was coming to an end as he moved on to the promotions and marketing department. He didn’t end with a whimper by any means but a fresh viewpoint was welcome.

Roy Thomas did a sort of re-launch by retelling the origin of the Fantastic Four, using the slightly contrived method of having the Thing reminiscing while wearing Reed’s new thought projector helmet so there are visuals to go with his words. Remembering the team’s first villain, Mole Man, sets Ben Grimm to thinking. His girlfriend Alicia is blind. Moles are blind. Perhaps Mole Man has a cure for Alicia! I’m being facetious. The rationale is better than that, and leads into a great underground adventure which revives a couple of long forgotten subterranean villains. As a fan of early Marvel, before he joined the team, Roy Thomas had an almost encyclopaedic knowledge of the old stuff which he often put to good use.

He’s also a liberal. Having raised the race issue, he now dallies with feminism by having Sue argue with Reed about her role and introducing a domineering lady super-villain called Thundra. From parts unknown, she has come to Earth to fight the world’s strongest man, which she believes to be the Thing. To accomplish this, she joins the Frightful Four, a team of bad guys with a name that reeks of Noel Coward to English ears. (‘Simply frightful, darling!’) or perhaps of older works by Agatha Christie. The Fantastics survive the Frightfuls and after a dalliance with the Inhumans, written by Gerry Conway, go on to face a rich man who has it in for them again. This is followed by a great two-parter in which the whole of the USA becomes a distorted vision of the fifties with Marlon Brando bikers against crew-cut jingoistic patriots. ‘Rascally’ Roy was firing on all cylinders back then, though Gerry Conway scripted the second half, to give credit where it’s due.

Apart from a couple of issues by Ross Andru and one by Ramona Fradon the art is all by John Buscema and Joe Sinnott and is therefore beautiful. Not startling, not genre changing, not especially clever, stylish, daring or anything like that; just simple, competent and lovely. This kind of illustration is too often undervalued, methinks.

All in all, this is another fine collection of stories to add to your collection of collections. Together with the first five volumes, this makes thirteen years of yarns from ‘The world’s greatest comic magazine’ and although they take up a lot of space on the bookshelf they really are frightfully good; almost, dare I say it, essential. 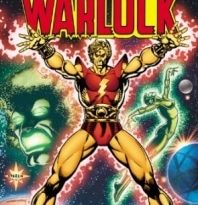 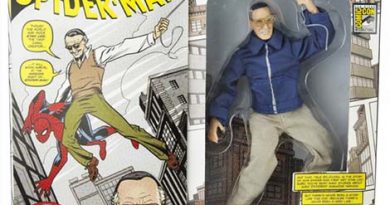 Stan Lee: the man, the myth, the legend (audio).