I’m not sure if I agree with author and scriptwriter Weiko Lin’s book title of ‘Crazy Screenwriting Secrets’ as much of it is sensible things that can be applied to all types of fiction. Weiko Lin says it has more to do with his favourite movie title, ‘Crazy Heart’ and that everyone is born crazy. He later goes on to describe fictional characters have to be extreme in some way which is true but I’m not altogether sure how that defines as them being crazy. Well, maybe if you stay within a crazy situation than walk away from it. I blame the writers. With writing what you know, he cites this with your emotional content to make it work because you are using something that can be used to make a connection to the reader. 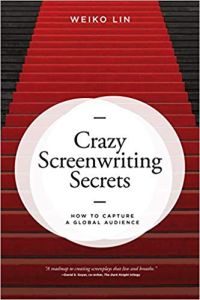 Weiko Lin keeps three notebooks to cover the aspects of character, story and dialogue, although I keep the equivalent in one datafile or notebook myself as a lot of the time I can look through them as a collection. I do agree with him that you do need a working title for a story but have done it both ways. A lot of the time, depends on how confident you are as a writer. Having only one key protagonist and one key antagonist might keep things simple but I can give plenty of examples where this rule is broken. Even so, I agree with him that you first have to know how to play by the rules.

One thing I do worry about is when Weiko Lin gives film logline examples he mixes characters with actor names which he should know better about. All right, maybe in a lot of the examples chosen, you might know the actor’s name more than the part they played but acknowledging both, which he did at first, he should have stuck to the part name. After all, the actor is only playing a part and not necessarily him or herself.

Weiko Lin does hammer home a lot more effectively that in scriptwriting, less is more. I think the problem for the novice scriptwriter is that they think they get paid by the word. In reality, it’s probably by the number of drafts you write and, if your script is bought, understanding that the notes you receive to change things have to be understood and implemented but not necessarily as written. That area is the biggest area of hard work.

Like with any story, a writer can fall down after writing a decent beginning. Weiko Lin emphasises that the middle act is designed to push the story towards the conclusion. It’s also where you earn your salt by getting it right. Getting the glue of that sorted out so the viewer follows through to the end is important. As with any fiction, what you finally see never shows the amount of work done to make it look so ‘easy’.

I’m less sure about leaving a scene that you haven’t worked out. Yes, I can understand it needs to be sorted to propel into the next scene but there also needs to be some flexibility as well. Understanding where it’s going to lead up to can give some understanding as to what is causing the bottleneck. Generally, I tend to come up with several scenarios as to what is needed and can either use one or more or eventually come up with something else completely from what I’ve learnt while I write fiction. The important thing is to keep thinking than stagnating and look at all the plot choices than going along with the first one. It can also allow for an option that the viewer/reader can’t anticipate.

As this is an American book, it’s inevitable that Weiko Lin explores agents and producers in Hollywood. What was more surprising was his exploration of Chinese cinema. As he can also speak mandarin and has taught film over there, this does made sense. 1 in 6 people in the world is Chinese and that is a lot of people. He also points out the restrictions that the Chinese government puts on types of stories. No time travel to change history being a key one from out genre although I would speculate that someone should try a story to ensure Chinese history goes as it is today might get around that. Even that is hardly a new trope in SF. It’ll be interesting to see if a Chinese language release of this book will be sold in China.

There’s still a lot you can learn from this book. Weiko Lin makes a lot of valid points that can apply to all fiction, especially in plotting. For scriptwriters, you will find this a useful bible of how to approach the film industry.

check out websites: www.mwp.com and www.weikolin.com