Collecting isn’t anything new. In our genre, I’d defy anyone reading here to say that they don’t collect anything related to their interest. It’s par for the course. This book, ‘Cabinets Of Wonder’ written by Christine Davenne and photographed by Christine Fleurent explores the roots of this by examining various collections which started off as picking up souvenirs and then putting them in cabinets to look after and show them to other people. What’s the point of just hiding things in the attic? Well, other than storage when you had new things to show off. When the cabinets became too small, they were spread over rooms and eventually some even became the starting points for museums. What they also show is something about human quirkiness, picking out the oddities and rarities rather than mundane objects. As with all things, you also get some extremes as well and there’s even a photo of a make-believe mermaid skeleton. Rather interestingly, for anyone who saw the Damian Hirst pregnant woman statue showing half of it with the guts showing recently, will find this isn’t a new thing neither and there’s a selection of photos showing such exhibits. Considering the time they were built, no doubt there were few books or displays on the subjects concerned so obviously led to such choices being made. After all, you would want something different to show that would stand out from other collectors which is an obvious hint of early geek competitiveness breaking out.

The range of collections shown here is rather startling and it even backtracks to butterflies and beetles being preserved to show the wide variety that exists. For those of you who wonder where to put some of your large collections, spare a thought for those who collected stuffed animals and pinned them upside down on the ceiling as part of their solution.

Probably the most bizarre photos here are of the man-made chimeras which might spook many of you out by their sheer quirkiness and where things like unicorns pale by comparison. I should point out that there are more than stuffed animals in this book and will certainly attract visitors to your house to look at, wonder on your taste but won’t stop them looking through the entire book. Don’t think all of these collections come from anything up to early last century. The likes of Henri Cueco were going strong into the 1990s.

If I am to be critical then it is to the size of the font for many of the pages which left huge chunks of the text pages empty when it could have been used larger for the readers’ eyes. This might have been an effect of translating from the French and keeping to a similar format but I would have thought an editorial decision could easily have altered this. The text boxes for the photos are even smaller illustrates (sic) a similar problem.

Looking for books that should hold an attraction for people like us does turn up some interesting choices from time to time and ‘Cabinets Of Wonder’ is certainly one of those. I would be more inclined to categorise this book for the bizarre and yet there is a sense of beauty here as well. If nothing else, it will convince you that having a collection of anything isn’t new and in comparison, a lot of our collections are tame in comparison. 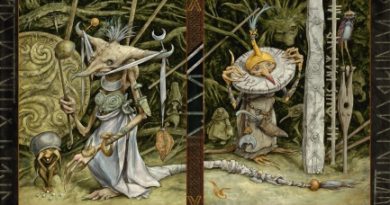