Joltin’ Joe Sinnott, as he was sometimes known in Marvel’s credit boxes, was an American comicbook artist who worked in both pencils and ink. He passed away on 25 June 2020 at the ripe old age of 93. He worked until March 2019 on the ‘Amazing Spider-Man’ strip for newspapers, as well as odd bits of commissioned artwork. Sinnott had a good run. In a fit of nostalgia for a childhood spent loving his brush strokes, I went mad and spent money – not much – on this digital edition first published in 2007. TwoMorrows has run out of papery versions but they are still available elsewhere for a not inconsiderable price. The digital worked fine for me and buying direct supports the publisher in these difficult days. 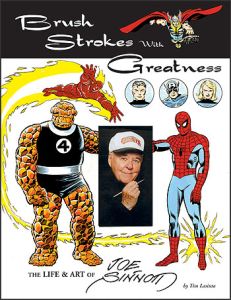 Joe Sinnott was born and grew up in Saugerties, New York State, in the Catskill Mountains. Apart from a spell in the U.S. Navy in World War II, where he served with the Fighting Seabees in Okinawa, he seems to have lived there most of his life. After the war, he studied at the Cartoonists And Illustrators School in New York City on the GI bill. One of his tutors, Tom Gill, took him on as an art assistant and he worked weekends and evenings on comic strips for Gill, learning a lot. Eventually, he was doing everything. Gill did much work for Stan Lee at Timely Comics, so Joe went to see him. Stan handed him a script from the top of a big pile and that was the start of a long working relationship. Sinnott remained friends with Tom Gill and was always grateful for the quality apprenticeship.

Although Sinnott worked mostly for Timely and, later, Marvel he did other stuff, too. In 1957, when Stan was ordered by Martin Goodman to get rid of all the freelancers and use up his stock of ready pages, Joe went to work for ‘Classics Illustrated’ and Charlton Comics. He did some advertising illustration, too. When Marvel started taking off again, Stan gave him Fantastic Four # 5 to ink. Later in the book, Joe lists his favourite work and FF # 5 is at the top of the list. Next is FF # 91 (‘The Thing Enslaved’) and then the covers of FF # 51 (‘This Man, This Monster’) and FF # 55 featuring Doctor Doom. His favourite character was the Thing. When Wally Wood saw Sinnott’s work on the Fantastic Four he said, ‘Now that’s how Kirby should be inked.’

Of course, Sinnott didn’t ink every issue of Fantastic Four from # 5 onwards. Wouldn’t that have been great? He had a prior commitment to do a comicbook on Pope John XXIII for ‘Classics Illustrated’. However, he returned to the title with issue # 44 (‘The Gentleman’s Name Is Gorgon’) just as Kirby was hitting his peak. According to Mark Evanier, the way Joe inked the strip contributed to how Jack drew it. For one thing, it was worth doing your best work because Sinnott’s inks would enhance it. Unlike some inkers, he didn’t skip the hard bits or rub out figures he was too tired to bother with. He turned Kirby’s Krackle into circles, a style Kirby began to emulate in his pencils and made the Kirby glow shine brighter. He also made small adjustments to hands and corrected little errors. Some pencillers think the inker should follow their work exactly but that isn’t always for the best. Gil Kane resented his style being toned down but most readers think the work looked better inked by Sid Greene than by him. Kirby’s art was improved because Sinnott didn’t ink every squiggle or changed it if he did. The humans looked more human.

There’s a lot more to Joe Sinnott than just his work on Kirby. He stayed on the ‘Fantastic Four’ until 1981, giving the strip’s appearance a kind of unity when other artists took over, including John Romita, John Buscema, Rich Buckler and George Perez. He also had long runs on ‘The Avengers’, ‘The Incredible Hulk’ and ‘The Mighty Thor’. In general, he was given the top-selling books with the best artists.

There’s an amusing chapter where Sinnott gives his views on different pencillers. Nothing controversial or nasty as he was a nice man but interesting. John Byrne used to draw necks too long. The panels of Perez were busy with detail and took longer to do. Sal Buscema’s tight pencils were a pleasure to ink. Steranko drew every brick in the background and a page took twice as long as usual. Unknown to Joe, Steranko had titanic rows with Marvel’s production manager Sol Brodsky to make sure Sinnott inked his stuff. Everybody wanted Sinnott inking their stuff. Now and then DC tried to lure him away but Stan Lee assured him he would match whatever page rate they offered. That’s a good position to be in. Sinnott earned it.

As a Marvel/Kirby fanboy, I’ve focused here on that aspect of the book but there’s much more herein, including many tributes, and it’s filled with wonderful illustrations. Sinnott was no slouch as a penciller himself and did complete art jobs for many advertisers and some charity work, too. He was mad for Bing Crosby and supplied illustrations for the fan magazine. He also had a wife and family. Like most successful freelancers, he kept to a disciplined routine, working from 07:45 to 16:30 with a half-hour lunch break, maybe doing a little more after supper if necessary. Later, he went to conventions and mingled with the fans. He had a good life.

Joltin’ Joe has left and gone away but his legacy is a wonderful body of work. ‘Brush Strokes With Greatness’ is an interesting read, a great art book and a fine memorial to a decent man.