This version of the film ‘Attack Of The Killer Tomatoes’ has been rereleased as part of the MVD Rewind Collection from MVD Entertainment. There are two discs in the box with one being a DVD and the other a Blu-Ray. Apart from the format of the film – High Definition Blu-ray (1080p) and Standard Definition DVD (1.85:1) – I couldn’t see any differences in the contents of the two discs.

For this review, I watched the DVD disc and I must say the visual quality was rather good. When you consider that the budget for the film was just $100,000, they must have used a significant amount on quality film cameras. The helicopter crash early in the film is a real crash and destroyed the helicopter which was valued at about $600,000. I’m assuming it was insured as it would have seriously blown the budget and possibly bankrupted the production. 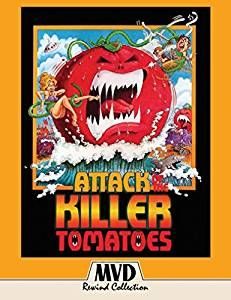 I’m really at a loss on how to review this film. It’s clearly a spoof or at least I hope it is as I’ve half a dozen of the potentially murderous brutes lurking in the fridge next to some courgettes. The original version was released in October 1978 and, while it mainly caricatures various B movies, it does have a pop at the mega blockbuster ‘Jaws’ which was released three years earlier in 1975.

For those who haven’t seen or heard of ‘Attack Of The Killer Tomatoes’, it’s a comedy horror film where tomatoes have become intelligent and rather aggressive. You could say they are revolting. There are a few song and dance routines, so I suppose you could say it’s a musical comedy horror film. As well as parodying the rather lame B movies of the time, there are elements of slapstick humour and satire on show. Some of the gags work really well and are very funny while others are just plain daft.

There are quite a few extras on the disks which are worth watching if you want to increase your knowledge of Killer Tomatoes trivia. The full list of extras is shown below.

‘Crash And Burn’ (3:40, SD) is a discussion about the famous helicopter crash that could have killed everyone because the pilot was late on his cue.

‘Famous Foul’ (2:21, SD) is about the San Diego Chicken and his role in the climatic tomato stomping ending.

‘Killer Tomatomania’ (4:33, SD) is a smattering of interviews with random people on the streets of Hollywood about the movie.

‘Where Are They Now?’ (2:51, SD) fills viewers in on what the cast and crew have been up to over the past couple of decades.

“We Told You So!” (3:07, SD) takes a hard-hitting look at the conspiracy of silence surrounding the real-life horror of killer tomatoes.

‘Do They Accept Traveler’s Checks In Babusuland” – the original 8mm short that inspired ‘Attack Of The Killer Tomatoes’ with optional audio commentary (SD).

Also included in the box is a foldout poster, slightly bigger than A4. Of the disc extras, I did enjoy the ‘Where Are They Now?’ section. It’s quite tongue-in-cheek, so it’s hard to tell if they are being truthful or fanciful.

I had an enjoyable time spread over two days reviewing ‘Attack Of The Killer Tomatoes’ and all the extras. This reissue is worth buying if you want to see the film or are already a fan. The disc extras are worth the asking price of the film. I expect it will appear in the UK shortly.