The TARDIS is in the far future and the Doctor (actor Peter Davison) tells Tegan (actress Janet Fielding) and Turlough (actor Mark Strickson) that they mustn’t interfere with one of the last human colonies. However, the TARDIS gets caught up in a meteor storm and forced to materialise on the planet Frontios. The colony there is falling apart since its captain died and his son, Plantagent (actor Jeff Rawle), is decisive but makes poor decisions. Chief Orderly Brazen (actor Peter Gilmore) controls the military but tries to keep knowledge of people vanishing concealed. The scientists, Range (actor William Lucas) and his daughter, Norma (actress Lesley Dunlop) do their best but the colony laboratory has been barred to them. 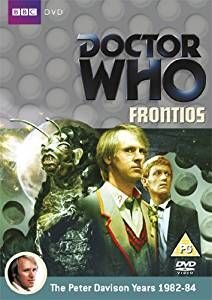 The Doctor proceeds to help some of the injured colonists from the meteorite crash but needs more light. He orders Tegan and Turlough to get lights and medical supplies from the TARDIS but they find only the control room accessible. So they and Norma break into the colony laboratory to get a power supply to power the generator.

Plantagenet believes the Doctor belongs to the people who’ve been bombarding Frontios with meteorites the past 30 years and orders his death but another meteorite storm stops that and after it, they find the TARDIS apparently destroyed, leaving only a hatstand. Turlough uses it as a supposed weapon to keep the colonists at bay and then Plantagent collapses, injured by a meteorite shard. The Doctor saves his life and gets Norma to analyse the meteorite fragment in the laboratory. Turlough works out a way into a tunnel system under the laboratory and he and Norma investigate. When the Doctor and Range find the tunnel they also explore, only to run into a deranged Turlough who is experiencing a racial memory of the alien Tractators. Leaving Range to care for Turlough, the Doctor continues, later to be followed by Tegan, after Plantagenet has vanished into the ground, and they run into the Tractators who has Norma prisoner. The Doctor orders Tegan back but is captured himself. Tegan rescues him and Norma by throwing her chemical light at the gravity field shortening it out and they escape.

They return to the other three and the Doctor orders them all to the surface, although Tegan still follows him. Captured again, they discover Plantagenet is still alive and is being lined up to replace his father as the intelligent control of the Tractators mining machine. Their plan is to turn Frontios into a gravity-powered planet to go off and conquer other planets. For more, you need to watch the story, more so as there is rebellion amongst the humans.

The plot of this story is a little messy towards the end. No thought is given as to whether Brazen survives being connected to the Tractators mining machine. Tegan also thinks she has to rescue the Doctor all the time, although in this story is about a 50/50 split. Again, we get reference to Turlough’s home planet and how these Tractators were wiping out their population but no idea as to whether they survived or what really happened other than his racial memory. There is also the little matter of just what did the Tractators do with the other humans that they sucked into the ground as they couldn’t have been using in the mining operation. It’s shown in the extras and commentary that there are other people connected to the sides of the mining machine but far more people have ‘vanished’. Maybe the Doctor should be called ‘Doctor DoSomething’ as it’s often used in these Davison stories.

The audio commentary is divided between actors Peter Davison and Jeff Rawle and script editor Eric Saward and special sounds designer Dick Mills for the first two episodes and actor John Gillet for the last two. Topics range from lightning man John Summers to be the only award-winner to do them on ‘Doctor Who’ to actor Peter Arne who had been fitted for costume as Range before being tragically murdered.

John Gillet, who played the Tractator leader Gravis, explains how he had 3 strings to manipulate his mouth for talking. Oddly, none of them recognised that the Tractators antenna were just that rather than another set of eye-stalks although did spot the likeness to woodlouse. Comparing knowledge on ‘Doctor Who’, Jeff Rawle appears to know more than Peter Davison about Who mythology. There is some recognition of the difference in speed of plot over the decades. Personally, I think a lot of it depends on the series watched, even outside of ‘Doctor Who’. Some just work better than others.

Oddly, there are only three extras. The usual Photo Gallery, of course. The 32 minute ‘Driven To Distraction’ has cast and crew discussing the problems they had making it. Bidmead admits to borrowing from ‘Quattermass’ to more details about the death of Peter Arne. There was also a race through filming the sets when they had less time to do them in and the lack of budget results in Tractators who couldn’t do as much as Bidmead wished. Jeff Rawle does an interesting comparison between ‘Frontios’ and a ‘Sarah Jane Adventures’ story he appeared in.

The ‘Deleted And Extended Scenes’ makes a quarter of an hour running. It’s interesting that one scene shown is of the TARDIS arriving in front of the colonisers. If it had been kept in, it would have made the Doctor’s statement of showing them the TARDIS meaningless. The mystery of the emptying liquid fuel cell is also shown. There’s also a completely deleted scene that the Doctor got Tegan to pose as an android.

A quirky story but at least everyone had something to do and I doubt if it would be in the Time Lords Archive.