If anything, I’m surprised that there hasn’t been an ‘Alien Vault’ before now until I discovered that it was originally printed in 2011 by Voyageur Press. Whether there is any difference between the two editions is hard to say but if you missed it then, now is the opportunity to get a copy. Ian Nathan’s book principally only covers the first film with a few pages for the remaining films and I hope someone considers doing an ‘Aliens Vault’ because the second film deserves a similar treatment. 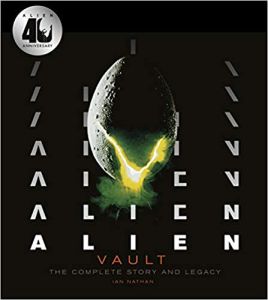 On a first flick through, I’ve seen most of the photos before but there are more extensive studio blueprints of the Nostromo and an introduction by actress Veronica Cartwright who played ‘Lambert’. There are pockets in the covers of the various things but a bit tricky to open which does defeat the object and I left them stuck for now.

Before going into the history, Nathan focuses on ‘Alien’s most famous scene and the delays for the cast before doing it. Interestingly, there are hints that there is more footage than we’ve seen in the film and associated extras. 6 gallons of blood had to go somewhere and it looks like Veronica Cartwright got more than a splatter than what we see in the final edit.

Looking at the photo of the crew from the opposite side in the cryochamber does at least indicate it wouldn’t really have mattered whether the two actresses had masking tape on their breasts in the final cut as it never rotated that way. Watching the film again after reading this book, I finally spotted Lambert wearing the masking tape in the cryochamber, so maybe it does.

I found it rather interesting using Nathan’s list of music that Ridley Scott kept in that wasn’t Jerry Goldsmith, although it does say as much in the end credits when I took a concentrated look. Much of it is available although a track from Goldsmith’s ‘Freud’ soundtrack CD isn’t widely available but only a limited edition and kind of expensive to buy. Some of the others are a lot easier and I wonder how many of you will want to track them down. Nathan notes that for the end chase sequence on the Nostromo, that Ridley Scott had music on set for Sigourney Weaver to perform to but doesn’t say what it is. Does anyone know?

Looking at the designs of the Nostromo bridge together, one of them does look like it was resurrected in ‘Prometheus’. Then again, Lambert’s original fate does show some similarities to the death of the alien in ‘Alien: Resurrection’. Nothing is lost forever. Something I wasn’t aware of was each of the cast was given biographies for their characters which I’ve never seen in print and would love to know if it was still available. The only thing noted is that Ripley didn’t acquire her forename until ‘Aliens’ so presumably this is true for the rest of the crew.

If you wondered how Ridley Scott had access to the laser light used in the egg chamber, we all owe out thanks to rock and roll or rather the rock band The Who who were experimenting with it next door at the time. Reading through all the information about ‘Alien’ here, it’s like a big jigsaw getting all the right parts and added finance together at the right time. I wonder how many directors wished they were that lucky without compromising. Well, all right. There was some. We didn’t get to see the temple or alternative deaths because of budget but it looks better for less.

I was a little puzzled by the Space Jockey’s scale because it doesn’t look like Scott’s own children in spacesuits in the final cut climbing over the corpse. You can decide that yourself because I bet you’ll be rewatching the film after you finish this book wonder why even on repeat viewings didn’t spot some things like I did. Oddly, I keep thinking I must be naïve not to associate Geiger’s vaginas and penises with the final appearance but it still doesn’t dawn on me that way. I just accept it as the way it was. A hole is a hole no matter how it is decorated.

‘The Alien: A Psychopathology’ briefly addresses the xenomorph being a hermaphrodite. I would query that as, outside of the queen, its final form isn’t really a breeding version and takes a long time to lay an egg. I mean, why else would it cocoon both Dallas and Parker to breed from them? Turning them into eggs seems the least plausible and I thought both had been implanted.

You get the picture, there is a lot to read and think about with the ‘Alien Vault’. Is there anything missing? Well, it would have been interesting to have had photos of the Brandywine company personal like Ron Shusett, Gordon Carroll, Walter Hill and David Giller. Although quoted over the years, no one seems to put names to faces in these books.

As with all books about ‘Alien’, there’s a tendency to want to buy, read and own and the ‘Alien Vault’ is no exception to this. The fact that I discovered a few things I’ve missed after repeat viewings shows that this book deserves your attention.