This little book contains three stories by Daniel C. Smith, all of which were first published in ‘The Fifth Di…’. Nomadic Delirium Press has an enlightened policy of putting out these one author collections so that readers who like the writer can garner a bunch of his stuff cheap.

I like Daniel C. Smith. As you can see by the title of this collection, he’s quirky. 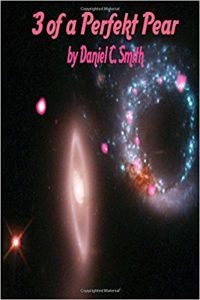 The first story is ‘Artemis One’. Earth receives a desperate message from Artemis One, a spaceship that’s just touched down on the Moon and Commander Stuart Ullman is requesting permission to EVA (Extra Vehicular Activity). There’s only one problem with this, the International Space Agency hasn’t sent a ship to the Moon since the 1970s and nobody’s ever heard of Artemis One or Commander Ullman. Yet the broadcast definitely came from the Moon. Ruthless Marine Sergeant Diane Johnson and a small team are sent to investigate in a fully automated ship. They are soldiers, not pilots. Johnson is the type who obeys orders without question, confident in the wisdom of her superiors. She may regret that.

There’s more space adventure in ‘The Proteus Effect’. Captain Beckett and the crew of the ISS Nemesis have been sent by Lunar Command to the Proteus Station on Ganymede, silent now for three weeks. They find four people in enviro-suits frozen in positions of violent rage, all killing each other. Life support is not functional, which accounts for the freezing perhaps, but how did it happen so quickly and why were these learned scientists at each other’s throats? A clever yarn and the pseudo-science is up to scratch.

Lastly, it’s back to Earth for a drama that seems almost contemporary. In the third story, entitled ‘theirownspace’, we find Mr. Carlson rattling his celuvid newspaper angrily and complaining about young people today. Mrs. Carlson is dutifully doing the dishes and wondering why the postman has come twice.

Young master Marvin Carlson is upstairs jacked into hisownspace which streams educational protocols directly into his cerebral cortex and allows him to communicate with anyone, anywhere on the globe. His dad thinks he should get out in the real world and interact with people face to face. These old fogeys never change.

It doesn’t turn out quite how you’d expect. In fact, none of them does. Daniel C. Smith has more than a trace of the Philip K. Dick about him. Before androids dreamed of electric sheep, Mr. Dick wrote stacks of clever short stories for the burgeoning SF magazines of 1950s America. In a small way, Daniel C. Smith is doing the same for the e-mags of the new millennium and three are collected here. Worth a look.