‘The Tulku Of Titan And The Terror Of Titan’ is a short book so I won’t have a lot to say. I picked it up because I have read and enjoyed Mike Morgan’s stories in various magazines. This batch of two stories was put out by Nomadic Delirium Press, who bundle up works previously published in their magazines into little individual author collections like these. It’s a good idea. 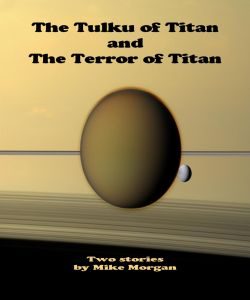 First up is ‘The Tulku Of Titan’. Most of the SF I read and watched growing up assumed that religion would die away when mankind reached for the stars but there were exceptions. On television, ‘Star Trek’ takes humanist principles for granted but ‘Babylon 5’ had religion in the background. In books, ‘A Case of Conscience’ by James Blish has a Catholic premise, as does ‘A Canticle For Leibowitz’ by Walter M. Miller, Jr. It seems obvious now that, for good or ill, the religious urge is part of our make-up.

In ‘The Tulku Of Titan’, Mike Morgan goes with Buddhism. Three monks examine the omens and find, one with great reluctance, that they will have to make the long journey to Titan, one of Saturn’s moons. Not the moon itself but Titanville (pop. 4,612), an orbiting processing plant for hydrocarbons that are mined on Titan. They surprise the locals when they arrive and are surprised in turn. To say more would give away too much of this brief yarn. It’s good fun and the characters are a likeable bunch. Oddly, it reads like a prologue to a book rather than a complete, finished story in itself but that doesn’t diminish it by much.

‘The Terror Of Titan’ is definitely complete in itself and falls into the old-fashioned SF detective story category. Was it pioneered by Asimov in ‘The Caves Of Steel’ or were there earlier similar works? No matter. The setting is Titanville again and a man has been murdered, his spacesuit sabotaged so that the grim reaper took him after EVA (that’s Extra Vehicular Activity, folks). Marshal Augusta Therm is on the case but burdened with two confessors, one of whom must be lying. Tregor Unwin says he did it and Mrs. Clarice Unwin says she did it. Clearly, one is covering for the other. The Marshal sorts it out.

Titanville is a well-realised and realistic setting. Mike Morgan’s prose is a plain, simple delight and his characters are as rounded as they can be within the confines of a short story. This little book is worth a look.