From the opening chapters of Tochi Onyebuchi’s novel, ‘War Girls’, you wouldn’t think there was a civil war going on between the Nigerians and Biafrans in 2172. In fact, you learn more about the war situation from the cover slip about the climate change and nuclear wars that made a large part of the planet uninhabitable than in the content.

The exception being the much of mankind has moved off-planet but no resentment from those who chose to stay behind, despite the war going on. 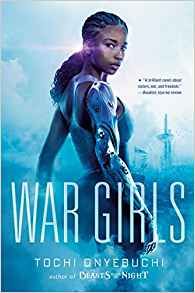 Where Onyii and her younger foster sister, Ifeoma aka Ify, live is a place for cyborgs or Augments, which both of them appear content. All that changes when a bomb hits the place and as what the Nigerians really want is Ify, whom they later explain to her is that had been originally kidnapped from them when her parents were killed by Onyii. She also believes Onyii is dead and stays with her liberators. Actually, Onyii is only damaged and after beings suitably repaired and joins the team for a return attack. She is a decorated officer known as the Demon of Biafra.

The war continues and much of it is spoiler, including when a ‘peace’ is achieved. At the back of the book, Onyebuchi points out that he was using the 1960s Nigerian Civil War as his template for this novel, although I do wonder why and how another war erupts here again.

As I read this book, it became more obvious that author Tochi Onyebuchi likes his descriptive terms more than emotional content. As such, Ify seems to accept her ‘capture’ unquestionably, despite being in Biafra since young. In equal part, so is the technology, described as using gears and such rather than being solid state. Cyborg technology isn’t cheap in any century although both sides apply it to their soldiers, presumably after they were injured and they aren’t totally indestructible. Oddly, there is never any indication why the humans off-world don’t intervene to bring the war to a close neither.

This also applies to the plot itself. Onyebuchi tends to skip the wider picture and focuses on the plights of the two ‘sisters’ rather than integrate them together. It feels like a missed opportunity when it comes to wars and fleeing refugees that it’s still pretty much the same in whatever century.

However, when you combine this with cyborg technology, you have to wonder why one side doesn’t actually win a conclusive battle. In fact, when the war between the two nations is over, there is barely a ripple in the entire story confirming that Onyebuchi doesn’t add any emotional content to the text. All right, maybe between the two sisters but he clearly misses the bigger picture.

Their motivation seems lost at the end considering that they’ve been fighting against each other to suddenly change at the end seems a bit off. More so as the motivation isn’t really given. In many respects, Onyebuchi is tending to internalising and not giving enough information to the reader and hoping we pick the bones out of what he gives.

It took a lot of thought after reading that made me think this book still needs a lot more work than given in this draft and that Onyebuchi got caught in giving what he gave in the original proposal than develop the plot. A shame really, as there is a lot of potential here when he ultimately went along with a standard plot at the end. 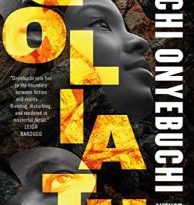