I suspect a lot of people in the know have been waiting for this book, the ‘UFO: S.H.A.D.O. Technical Operations Manual’ to be released. More so if you’ve just been recruited as an operative for Supreme Headquarters, Alien Defence Organisation and can be given a briefing that can be read at your leisure rather than in any formal meeting. Considering SHADO recruits aren’t gathered in classes, this shouldn’t be surprising. 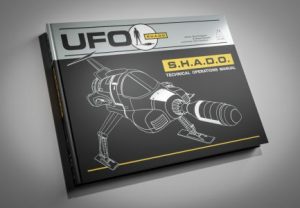 For those of us with higher security clearance, we are here to ensure the accuracy of this document and any ambiguities.

I’ve always considered the underground tier at Harlington-Straker to only be one level. The information here suggests it to be five levels which make it at least 60 feet below ground, although the pictures here tend to suggest what represents each department. I think this ambiguity is to cause anyone unauthorised getting access to a map to get confused. Afterall, why would you want the garage at the lowest level? I would disagree that the speaker in the headquarters is solely for SID because it was also used for Moonbase personal as well. Logistically, if there was a dedicated speaker for SID, why wasn’t there one on Moonbase?

From the early blueprints, Moonbase has always seemed smaller on the inside compared to the number of staff it houses. Back in the day, the sphere-shape Moonbase modules made a lot of sense for ease of construction but becomes impractical when working out how the space is used, especially for sleeping quarters. It obviously has several underground sections or where else would spare Lunar Shuttles be available or where was Shuttle 29 after the destruction of Shuttle 32 in ‘Conflict’? Guess what I’ve been rewatching this December.

Much of the original TV show did not disclose a lot of these operations, let alone show how the Interceptor pilots return to the Leisure Sphere. You don’t get all the answers here. A lot of the information does fill in some gaps that you might have considered but not all of it is security cleared.

Looking more in-depth at Moonbase, I do have to wonder at the crater where the Interceptors are housed and supposed to have 3 maintenance crew down there all the time. When its noted that Moonbase has only 20 personal, the sums are wrong. You have 3 in command, 3 interceptor pilots, a couple medics and technicians and, I presume, at least double or treble this for different shifts, the numbers don’t add up. Do the Interceptor pilots really need someone to move the ladders and get out of the way before the chamber is vacuumed for take-off when its easier to have automated machinery?

Speaking of the Interceptor, I’m less sure of the cockpit being capable of flying away from the main body simply because Moonbase lacks the means to go and pick them up. In many respects, the Interceptor pilots really are really on suicide missions considering the number of pilot casualties. Then again, I’m also pondering how the SHADO Mobile speed along when it appears its top speed is 40mph.

Where Skydiver is concerned, I’m still puzzled how 6 of them can cover all the world’s oceans. I mean, just one in the Pacific must limit its operational distance not to mention its frequent bad weather preventing seas-skim. With only 6 crew, you do have to wonder how they do their shifts to allow sleep and downtime. Uniting the two parts is shown here as an underwater operation, although I do think it would be easier on the surface. If the Skyfighter is to draw in ballast, it would mean filling the fuel tanks which seems impractical.

The same goes for the retrieval of its captain from the Skyfighter cockpit, coming back head first would be rather daunting and even if the flattened chair could swivel around, coming back feet first would have similar problems unless the submarine tilted. Yes, I’m aware it was shown how Waterman got out in ‘Ordeal’ but he still needed a crewman there to grab him. On the surface, it would be easier for the captain to get out and walk to the conning tower hatch with less aggro. Another minor point missed is how the Diver submarine aspect manipulates its ballast to tilt 60 degrees without bobbing up to the surface.

Don’t expect this book to have exact details. Even after all these years, I’m still no wiser how the spacesuit air supply works although I do think its pretty a form of rebreather and the soda capsule is more likely to clear the CO2 cleanser than supply air.

It’s rather interesting seeing the personal files and who’ve they’ve left in as much as those they’ve left out. I doubt if many would meet General Henderson, but was surprised Captain Lew Waterman was omitted as he appeared more times than either Carlin or Bradley. The disclosure of the absence of certain personal later for an American branch of SHADO does seem at odds with Straker’s plans in ‘Kill Straker!’ where he wanted to have more Moonbases.

Where the eye shields the aliens wear are concerned, other than preventing their eyes going green for the liquid in the helmet, I would also add that it improves focusing through the medium as well. Considering the aliens keep them in even when they take off their helmets, one could well think they have other properties and even act as a form of contact lens.

I should point out that the above criticisms are outweighed by a lot of good material in this book. Apart from illustrations, there are also a lot of photos that I haven’t seen before. If you’re a ‘UFO’ fan, then this book is automatically on your shopping list. If you’re being recruited into SHADO, then its also a must-read to see what you’re getting into. Don’t accept any amnesia drugs.