Michael is a struggling engineering student whose girlfriend, Alice, is a coder and is working on a mysterious project for a big Silicon Valley corporation. When she dies, that same corporation offers him a job, though he doesn’t really know why. With the job come secrets, industrial espionage and shadowy figures from Alice’s other life he knew nothing about.

In short: bewilderment and confusion. I was reminded of the backtracking, dead drops and off-grid messaging from Dave Hutchinson’s ‘Fractured Europe’ series but, in this case, Michael is caught up in something he has no clue about. Although you know he’s being played, you don’t know by whom or why or who any of them really work for. It’s wonderfully intriguing. 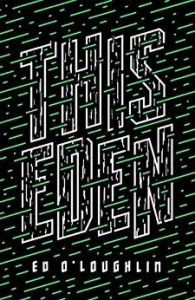 The novel is narrated by an omnipotent voice that appears to be following the story through CCTV, bank records and transcripts, recreating the story of Michael’s life through inference and telling us the most likely chain of events. It’s an interesting way of framing the story, leaving us to fill in some of the blanks through what we learn ourselves.

Two of the characters Michael ends up joining up with are Aoife and Towse, both of whom have murky and complex backgrounds of their own. Aoife, being Irish, has the kind of name you couldn’t guess how to pronounce unless someone tells you and author Ed O’Loughlin plays on this as he weaves in her backstory in Northern Ireland and the Republic. There’s some nice touches of authentic Irish dialogue that give a real feeling of genuineness for those flashbacks.

The story takes us through a series of varied locations as Michael moves on blindly following fate or so it seems, joining up with Aoife, following Towse, escaping from hair-raising situations and finding himself in yet more difficulties. Amazingly, Ed O’Loughlin manages to make all of this sequence of events seem perfectly reasonable and inevitable, even to Michael who is in way over his head. From Canada to Silicon Valley, on a circuitous route round half the world taking in numerous countries, each location has an air of authenticity, a grittiness and realism filled in by back stories from Towse or Aiofe. The crazy stories spun by Towse about conspiracies, industrial espionage, secret government experiments and the like are fitted into these real-world settings seamlessly.

There are plenty of moments of wry humour woven into the plot, references to well-known Science Fiction novels to keep you guessing and a style of prose that seems both friendly and convincing. I lost track of the twists and turns halfway through but, by that time, it didn’t matter too much whether I could figure out what was happening. There were so many possibilities, numerous parties involved, several coincidences and fateful meetings that it all became bewitchingly addictive. T

here are hints of Science Fiction of the near-future speculative kind, but with all the wild stories and conspiracy theories thrown into the mix you would be hard pressed to confidently call it Science Fiction, espionage thriller or its own unidentifiable genre of wonderfulness. I loved it.