The writers room is principally recognised as something that started in America and spreading across the world. In the UK, there are still solo or pairs of scriptwriters working together but a team under a showrunner is useful to sort out a season’s plots and scripts and especially in soaps. 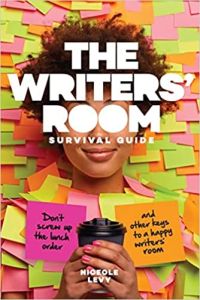 Niceole Levy’s book, ‘The Writers’ Room Survival Guide’, is more about the etiquette to understand what you are letting yourself in for and how to work your way up the ladder. Even if this isn’t your kind of career, it does give some insight into how it works and some of these approaches could be applied to other workplaces for teamwork, although I would be cautious about becoming a clique. It did raise an odd question about writers, rivalries and still being able to network with people who might want your job.

However, Levy points out that discovering what your fellow writers are like and any of them to be wary of from being litter louts or egotists, mostly kept on because of their talent, is always useful information. It also made me wonder how people ever get off the phone finding these things out, more so when it shouldn’t be on when in the writers’ room. One can only hope the worse scriptwriters read this to improve their behaviour but I wouldn’t bet on it.

I do have this odd image in my head of everyone reading this book following the edict of arriving half an hour early and not leaving until the show-runner or deputy does, subject to illness and family issues, is going to look scary. I’m less sure about nothing good can be written after 3pm as creativity doesn’t work to a timetable.

Please note, my comments aren’t in proportion to a lot of the good advice Levy is giving in this book and how flexible you should be for various writer’s rooms. Oh, she has also currently working on the ‘Cloak & Dagger’ TV series, amongst others.

It was interesting reading about research and they have to get freebies from people with expertise and no indication that they might want to double-check on-line. Even so, it doesn’t explain why so many medical errors pop up on the few American shows I’ve seen compared to the UK brand.

What makes this book fascinating is seeing how the writer is on the soundstage during recording and communication between her and the director and other personal in getting things recording and seeing everything stays on track.

Although I understand the need for knowledge about the people you’re working with, I do have to wonder how much can be said about the material that is being worked on without breaking confidential agreements.

Obviously, this is all set for the American market and the WGA seminars will teach you the ropes to understand the business. Looking at all of this as a collective, you would be an idiot not to take their advice because you would stand out as a novice in the room without it.

Reading through the lengthy glossary of words that can be used in the writer’s room, I did have a wonder at how many use them or those who do might see it as a code that shows you’re in, although Levy points out she doesn’t use many of them. There are a couple instances where I thought the origins were British. I would correct one thing, the BBC have been known occasionally to work around the problem of extended shows not breaking into its news slots.

A slight negative is Levy’s occasional use of initials, like TBD and HR, with no index as to what they mean and aren’t in the glossary. There should never be an assumption that we all know what these things are. I do think a general index would also have been handy.

I think I’ve learnt a lot more about writers’ rooms than I knew previously and some of it can be applied in other creative team applications. If you want to work as an American scriptwriter then this book is essential reading.