‘Curfew’ is an odd SF series. Don’t treat the cover as an example of the stars appearing throughout the 8 episodes because its not. I’m going to have to be careful what I say without going too spoiler but expect a high casualty rate and no one is really that safe.

In the near future, there has been an infectious variant spread that turns people into, for the lack of another word, monsters when bitten but they only come out at night. More mindless zombie like than vampire. As such, there is a curfew for the normal folk for their own protection. Not all people like this and with a promise of freedom on one of Scotland’s islands, a few people pay to get an expensive co-ordinates box, hype up their transport and have a race, the winner is the vehicle that gets to the island.

I should point out that the drivers aren’t always alone and families and friends might also be in the vehicles. It isn’t all about speed but survival, especially as the authorities don’t like it and blockade the various bridges out of the city, although this is as much to stop the monsters than the race. This is probably where the most fatalities occur. 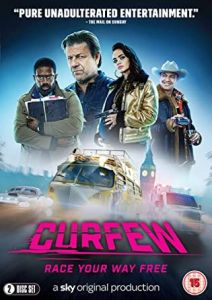 Just so this series isn’t just race, there are flashbacks to various people’s lives so you build up a picture of what is going on and their various talents. This doesn’t mean there aren’t questions. I mean, we discover the co-ordinates box can be bought for $250,000 although no explanation as to whether they all had to do that or where they got the money from. With that much money, you would have thought they it would be cheaper to just migrate.

The fifth episode brings a lot of things together once they are outside of London and certainly makes the most intense episode. It’s still hard to name all the characters, just go by their connections, but shows why you shouldn’t be out at night.

It’s only with the eighth episode that we get back to the actual race and a whooping finale to the end and a few spoiler declarations.

‘Curfew’ is certainly worth watching. When I switch into analytical mode, some questions are raised. I mean, its only with this race we get the right people at the right time. There’s no indication how many races there were in the past. All right, so convenience plotting is needed with most stories or you would never move it on. The diversity of characters and motivations ensures a good blend, although it does become obvious that certain previous occupations are going to be used later. Well, there is one exception but that’s spoiler.  Oh, its also got a great 70s-80s soundtrack.

I can see a time when ‘Curfew’ will get cult status, although you do have to wonder why there wasn’t a follow-up series. Not necessarily with the race but a more serious look at the society that has developed here and what else is going on.