‘The Tick’ isn’t a comic I ever actually read back in my day. However, if you think of ‘the big blue yonder’ as being the male version of DC’s Inferior 5’s Dumb Bunny in being strong as an ox and just as smart, you wouldn’t be far wrong. He gets lost in metaphor, let alone higher concepts. Thankfully, he does know the difference between right and wrong to the nth degree, even if he thinks a judge looks funny in a skirt. As I’ve been reading about this series in TV books I’ve reviewed recently, it was about time I sat down to watch it. ‘the Tick’ (the small ‘t’ in the title is on the box) is a surreal send-up of the super-hero genre. From comicbooks to animation to live action in 2001, it does follow the trend of other super-heroes crossing the mediums. Oddly, if anything, the main difference here is the lack of budget which as creator Ben Edlund points out in the audio commentary curbed them showing that many exploits.

It wasn’t until the fourth or fifth episode that I thought they hit their stride and when I completed the ninth re-watched the pilot episode, called ‘Pilot’ by the way (and no, there was no aircraft involved) again and think it might be more fifty/fifty split of getting it and them getting into their stride. If anything, the main weakness is the occasional strong line when there should be more of them.

The world, let alone the city they live in is comfortable with super-heroes. They even have a bar/restaurant that accepts them, although expect you to pay your bills. The Tick (actor Patrick Warburton) is persuaded thankfully to leave the bus station he is protecting to go to the city. There he meets up-coming-super-hero Arthur (actor David Burke), once an accountant but now has the calling. Quite what he is supposed to be is difficult to say and he never really takes on a codename although he is briefly called Moth Man by the Tick and Rabbit Boy by Captain Liberty. Speaking of which, Captain Liberty (actress Liz Vassey) is also super-human but a lot smarter than the Tick. Batmanuel (actor Nestor Carbonell) is on par with Arthur ability wise but he does have a car, which is handy to get around the city. Oh, you have to love it when they sort out the Tick’s identity card and give him the assumed alias of I P. Daily.

Arthur discovers from the start that the super-hero life is full of over-inflated egos and in terms of normality, the Tick’s own sense of morality is pretty normal in comparison. With the final episode, ‘The Big Leagues’, even Arthur’s own ego gets in the way when they are invited to join a super-hero club.

If you understand super-hero conventions (not the places where you hang out in queues to get autographs and sketches or buy comics), then you will most assuredly get what they wind-up and play around with. They make use of the budget by keeping up close and personal. There’s no bad language so acceptable to youngsters, although you will have to explain to them what kissing is about and not to invite Batmanuel to meet your sister, assuming you have one or many (he isn’t afraid of numbers). Although over a dozen years old now, it still holds up pretty well. Then again, in a reality of its own, keeping ageless isn’t that difficult. It’s also got two significant guest stars in the form of  Christopher Lloyd and Ron Perlman.

David Burke looks like a young Steven Guttenberg and still confused as to whether he plays Arthur or the White Flying Moth Rabbit Boy, mostly because I’m not sure about the ears on his costume and whether rabbits can fly? They aren’t in the same class as the mobile antenna that the Tick himself wears.

When I first saw the spelling of ‘Batmanuel’, though it was a textbook name. Discovering it was supposed to be ‘Bat-Emmanuel’ and for a character who was supposed to be a Spanish extract Romeo did eventually make sense. That isn’t his power by the way.

Captain Liberty, as explained by her creator, is essentially a female Captain America. It’s rather odd seeing the stills on the cover with her hair swept back when after the pilot episode (still called ‘Pilot’, it hasn’t changed its name as I typed this review up) when for the rest of the short season she keeps to the more sensible fringe.

As to the Tick himself. This is the first time that I’ve seen Patrick Warburton act so no idea how close it is to his true persona. As expected, he is totally surreal and you can experience how he struggles not to be distracted by…well…anything really. When he does focus, he can happily take on coffee machines and clogged toilets and a quick learner in returning dead super-heroes to their hotel rooms, well the second time at least.

‘the Tick’ is a bit of an acquired taste but I suspect I shall return and watch it again and wonder if someone will decide to do another re-make one day. Keep watching the rooftops. 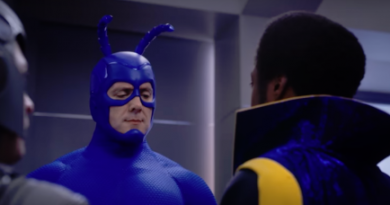 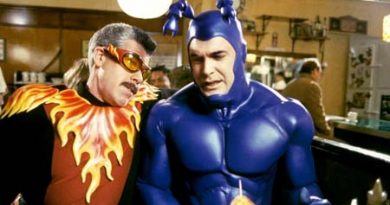