I have to confess that I thought the latest ‘Spaceship Away’ was just running late, especially as I knew publisher Rod Barzilay was involved in writing a Dan Dare book for Haynes Publishing, which is coming out later in 2013 and yes, I am scheduled to be reviewing it. Seems like this issue got lost in the post so a second copy arrived with the latest issue, which will be reviewed next month, staggering them for your budget and a sharp reminder that it’s cheaper to get these issues by subscription. This issue focuses on Yuletide with Dan Dare and his friends in the various throes of celebrating it. Even the Mekon get in on the act, albeit unintentionally by ending up being at the top of the tree. Don’t call him a fairy. You won’t like what he would do to you.

Oddly, the icing on top for this particular issue isn’t the strips but the written material. An appreciation by Alan Vince of the late artist Ferdinado ‘Nando’ Tacconi who worked on the comicstrip ‘Journey Into Space’. The samples of his art really need a proper book showing off the complete stories in one volume. A look at the nascent but aborted Zenith production of ‘Dan Dare’ which would have featured Robert Bathurst as Dare and Geoffrey Hughes as Digby which would have been inspired casting back in 1990.

What is the real meat, though, is an extensive interview with artist Sydney Jordan, creator of the ‘Jeff Hawke’ newspaper strip. It not only gives the highlights of his career but the feeling of what it was like working in the 1950s-60s and the various artists he shared studios with. There’s also an interesting contrast between UK and Dutch publishers, the latter being both more respectful and pay better, which just goes to show how far down the rung creators are over here. Like with the Nando appreciation, there are various samples of his artwork and one picture of bird versions of Sherlock Holmes and company as Corncrake Holmes, Doctor Witwall and Inspector L’Ostrich is worth the admission price alone.

I’m not ignoring the comicstrips in the mag. The are all springing along apace and sometimes in space. Apart from two strips featuring Dan Dare, there is also Charles Chilton’s ‘Journey Into Space’ and Garth in ‘Finality Factor’. All British quality. 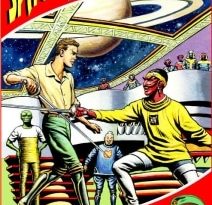 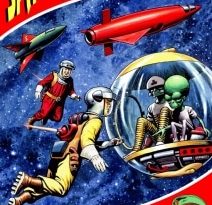