This John Sladek volume tends to be referred to by the main part of its title, ‘The Steam-Driven Boy’ with the ‘And Other Strangers’ often overlooked. Its important to note that because it is in fact an anthology with 13 SF stories and 10 parodies. 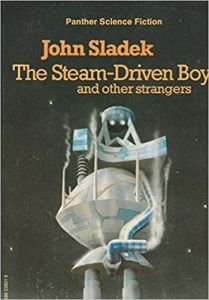 The most obvious thing I realised when I started the first story, ‘The Secret Of The Old Custard’ (1966), was short stories really was Sladek’s forte. You get swept into a story where a woman finds a baby in an oven and thinks no more than just about how but to raise it. Her children have to pay here for their meals and the dystopian world is revealed in a matter-of-fact tone. Considering its age, its truly magnificent and I had to hold back on reading these stories too quickly lest I miss anything. The art of short story writing is to focus on the immediate problem and build the story up around it.

‘Is There Death On Other Planets?’ (1966) is more a spy mystery that just happens on another planet.

‘The Singular Visitor From Not-Yet’ (1968) is correspondence between two people about a supposed time traveller who finds one of them anticipating the future, despite the time period being the 18th century. The twist is time travel makes a reverse look of the traveller, not to mention seeing a mirror image of text for a line or two. Bearing in mind this is pre-computer, must have raised the eyebrows of the printers.

‘The Momster’ (1969) is hilarious as a new person to stay on an off-world planet and pretty much left to his own devices has a robot called Rita but prefers Mom who looks after him. Really fun as you follow his frustrations.

‘Secret Identity’ (not dated in the indicia) does tend to re-enforce my thoughts that Sladek wrote in a state of consciousness in writing, throwing in detail as he goes with the plot, although I have to confess not knowing what its about but just a fun read.

‘The Transcendental Sandwich’ (undated) is about the problems with accepting gifts from aliens. This one is a gift of improved intelligence only they don’t reveal the price until the end. Think of this as something akin to Daniel Keyes’ ‘Flowers For Algernon’ with an alien twist, spotting the difference with their reading list the brighter they become.

Before anyone asks ‘The Steam-Driven Boy’ (undated but probably 1973) is obviously a robot, well actually an android and switched with a real boy. The parents are the twist.

The end section is full of parodies. Of who, is in the title list at the front of the book but not with the stories themselves. Much of them is the style of writing with a touch of humour about them. As they are based off the Golden Age writers, you would have to be familiar with them to recognise them. The styles were more distinct in those days and I think it would be harder to do today simply because there’s a diversification of authors and not everyone has read them all. The riddle in the Cordwainer Smith parody should raise a smile.

John Sladek is an acquired taste when it comes to reading. You get sucked in and feel grateful when you get out but want to try again. The fact even 50 years on that his stories still work is really a testimony to his technique. 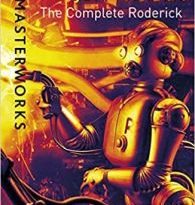