The last book I read by John Sladek (1937-2000) a long time ago was ‘The Müller-Fokker Effect’ (1970) which I thought was a bit bizarre, although its focus was on the survival of a human personality in a computer mainframe. I suspect people bought it because of its title rather than the content. 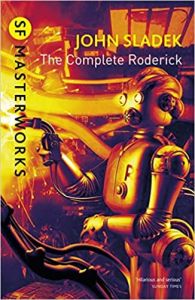 ‘The Complete Roderick’ is two novels combined in Gollancz’ SF Masterworks series, originally released in 1980 and 1983. Very much a realistic dialogue heavy with fruity language, so keep away from young sprogs. It’s also an interesting read as scientists covertly build a robot lest the army get wind of it and want it for their own purposes and then send it away.

The thing that makes this a heavy read is Roderick or Roddy is a learning robot, but the focus is more on the people he is left with to evade NASA and later other organisations looking for it. The first married couple is clearly very neurotic, and the marriage breaks down before Roddy is moved on to a more loving couple, stolen by gypsies, used as a fairground attraction, and then finally gets back and sent to school. So much for Roderick’s secrecy, although as he develops, people don’t think he’s a robot.

Confused? You betcha. Sladek uses this story to address various cultural things, and it becomes a heavy but interesting read. Don’t think Roderick looks the same as the book cover. He looks closer to a rubbish bin on treads with a claw, and easily dented initially. It’s very much underplayed but Tom Wood rebuilds Roderick periodically so he gains legs and looks more human-like, takes his foster-parents surname, and is sent to a catholic school for education and, alas, indoctrination into religion, which confuses him a lot.

It is also the best run of humour, especially about the ‘metallic conception’ and Roderick not believing in god as he was made. Of course, they don’t believe he’s a robot, let alone get his name right, calling him ‘Roger’. Social comments could not get better in this section.

It feels like Sladek is digging for ideas in the latter part of the second book in this volume and Roderick becomes a secondary character while there are debates about robots and AIs, citing SF examples, although not all of them are known from that time period.

Roderick also gets dissembled at one stage, although it turns out to be sorting out some of his mobility problems than deliberate destruction. Even so, it does present problems of what he actually looks like, more so as his image constantly changes and isn’t reinforced.

Without going too spoilery on you, the ending doesn’t make much sense, as the focus is away from Roderick – and has more to do with the fate of some people who wanted to topple him. It feels like Sladek either ran out of ideas or a page count to wrap the second book up.

In many respects, starting a John Sladek novel can be a bit of a hard slog, but that’s mostly because he makes you think hard as you read or it seeps under your skin. You think I give you a hard time when I switch to different languages in my stories. Sladek does everything from including diagrams to doing a James Joyce and not including grammar as we get inside Roderick’s head.

It is commented elsewhere that Sladek can be very surreal. They aren’t kidding. Sladek puts more characters to the mile in this book than any other I’ve read and they are all different. It has a tendency to have a feeling that he was making it up as he goes along, but, as he’s no longer with us, difficult to ask. Definitely an acquired taste, although I think I shall end up picking up a couple of other books he’s done.