Divers have found a body in a German river. The corpse of the long dead WW2 American soldier is still in the driver’s seat of his jeep and still cuffed to a briefcase. Miraculously, the papers inside the case are able to be recovered. Documents that list agents and double agents for governments all over the world that can still cause ripples through the political and intelligence world forty years after the end of the war. 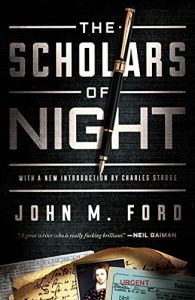 Dr. Nicholas Hansard, professor of Elizabethan history and dedicated gamer, teaches in a small and obscure university. Part time. The rest of his pay packet comes from his consultations with the secretive ‘White Group’ where he uses his research skills to tease secrets and truths from documents. It all seems so ordinary, so distant, like so much of the past, but with the added excitement of secret couriers and codewords.

When one of his dearest friends is revealed as an alleged Russian spy by his research and dies under mysterious circumstances, Nicholas tries to get out. Turning his back on his covert work, work that had seemed so innocent, Nicholas focuses on his historical work and authenticating a four hundred year-old play. History is not always so innocent and far away as we want to believe.

This book is not fantasy, supernatural, horror or Science Fiction. It is a straight up Cold War techno spy thriller and, while I enjoyed it, I did keep expecting something to portal in from another genre. I know I’m not meant to judge a book by its cover and a review should be about the words inside the book and not the ones on the cover by other authors talking about the book but in this case I couldn’t. I judged this book HARD before opening it up.

This is a book cover that set up some expectations before I even read the blurb. An introduction by Charles Stross, author of ‘The Laundry Files’ series? Glowing reviews from Neil Gaiman, who brought us ‘Sandman’, ‘American Gods’ and so much more, as well as Robert Jordan of soon-to-be-televised ‘Wheel Of Time’ fame? I had never heard of John M. Ford but if authors like Gaiman, Stross and Jordan were on board with his works being reprinted then I was going to give it a try. I went in expecting a dark academia style urban fantasy. A more fantastical version of academic time travelling than in Connie Willis’ ‘Doomsday Book’ perhaps.

An academic variation on Stross’ Lovecraftian government bureaucracy in the ‘Laundry Files.’ What I got was a strange combination of A.S. Byatt’s ‘Possession’ and a John Le Carré novel.

The vibe of this book is definitely familiar for those that grew up with James Bond and Jason Bourne. Secret organisations disavowed by governments but held at arm’s length to do those dirty jobs no one likes to admit to. Agents with the secretive controllers who have ruthless loyalty to king and/or country. Mercenaries loyal only to cold, hard cash. Fanatics loyal only to their ideals and while these characters on the ground rush around with dramatic abandon the ‘powers that be’ sit coolly in conference rooms and move pieces across the board. These are the characters a spy novel is made of. ‘Scholars Of Night’ is no different.

The connections between characters are convoluted at best and possibly only in my head. Codenames, real names, user names and cover identities are everywhere and only somewhat obfuscate the spider at the heart of the web. At several points, I was forced to go back and confirm who was going by what name to who to make sure I had things straight, but this is common for me in a spy thriller. What I found less common is the lack of connections between the various elements.

The novel feels like it is talking about the breakdown of national borders in the new ‘modern’ world but also had several government factions there solely to be the scapegoats. I have no idea why the central murder takes place. None. There is a vague connection to the briefcase documents but concrete reason is never revealed. Several documents are built up to important levels for, again, no discernible reason and are swapped, altered and stolen. Looking back now, it feels as if there should be a director’s cut of the novel coming out to put back in all the bits taken out that would draw in all those connections.

TOR began reprinting Ford’s work last year with the release of his 1984 World Fantasy Award winning novel ‘The Dragon Waiting’ in September 2020. I’m looking forward to ‘Growing Up Weightless,’ which won the Philip K. Dick award in 1993 and I think I might have read sometime in the distant past. Perhaps this sense of familiarity is what I liked about ‘The Scholars Of Night,’ which I definitely have not read but still felt warm and comforting like a familiar favourite as plot after plot was uncovered. The writing painted the 1980s for me, a past that I very dimly recall, in darkly shadowed hues. I do wish I hadn’t gone in with so many expectations as that kept pulling me out of the story.

If you liked watching a young Matthew Broderick save the world from thermonuclear war in the film ‘War Games’ in all its 80s retro glory then you will probably like this book. It’s so 80s in its tech and its life. Punks roam London’s streets and international spies need to find payphones.

It is both definitely set in the Cold War but also not. The modern eye can definitely see a familiar pattern of private enterprise toying with espionage and politics which elevates the novel from a simple retro spy thriller of the Russians being the big baddies. If you are looking for a nostalgia fest like Ernest Cline’s ‘Ready Player One’ you will be disappointed. There isn’t a pac-man in sight. 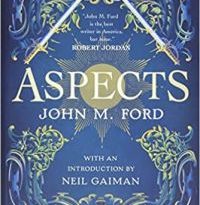