In the introduction to ‘The Science Of Sci-Fi Cinema’, author Vincent Piturro points out that since 2010, at a Denver SF show, he had been bringing in scientists to discuss their specialty related to SF films. For this book, 10 films have been selected. He gives the plot synopsises, the directors and other film history and various specialists discuss them there. Let’s hit the highlights. 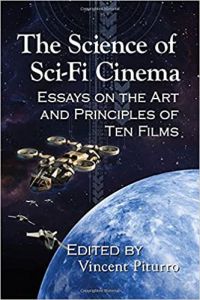 I’m still puzzling why ‘Arrival’ (2017) is thought to be a brilliant film. The aspects of communicating with aliens is well done but the linguist Louise Banks was a real cold fish who was brought into translating when she didn’t even show a trace of amazement when the aliens arrived. Andrew J. Pantos analysis of the problems of translation should be required reading, especially our assumptions that alien languages would have similar structure to our own but probably wouldn’t.

I’ve still to see ‘Interstellar’ (2010) but surely they must have realised that sending a father to investigate a colony that his daughter would have aged greatly before he returned. Considering this is the basis of the film, it’s badly thought out in my opinion.

Interestingly, Piturro’s observations of the plot of ‘2001: A Space Odyssey’ and its special effects is longer than Ka Chun Yu’s discussion on AI. Something that did occur to me that they don’t seem to have caught is HAL playing chess is demonstrating his tactical ability. When it came to keeping Bowman from re-entering the Discovery, the manoeuvre was to get him out to rescue Poole without his helmet.

Astronauts can’t breathe vacuum and so HAL didn’t expect Bowman to try the way he got in and got out-manoeuvred. Equally, HAL might have existed for 9 years, but he wasn’t the only one as a second one following the flight was on Earth and might not been programmed by the NSA to lie about the mission, hence the discrepancy between them. I suspect had it been done today, the HAL on Earth would be discussing a lot more with the HAL on Discovery and that would have changed the dynamic of the story, more so as we know so much more about communication and computers these days.

I should point out that I’m a believer in SF covers a wider range than the usual tropes but I do wonder why the likes of ‘Perfect Sense’ (2016 – IMdB says 2013) and ‘Upstream Colour’ (2013) are included. The first deals with people systematically losing their mains senses and the other getting organic implants. Granted major issues but it doesn’t follow we’re seen these films, which again looking at IMdB, did getting a panning. I should point out that this is hardly a new idea, Daniel Galouye did this with people living underground and losing their sight with his story ‘Dark Universe’ in 1961.

There is a feeling with some books of this sort is to include more obscure films so people are less prone to criticise. Considering from the introduction, Piturro says he’s been conducting these analyses for some time and obviously doesn’t want to pick the usual choices, if other people reading this and not seen this films looked them up, they would be doing similar eyebrow raising in the contrast in film quality.

The look at the original 1933 version of ‘King Kong’ pointing out so much was taken out to match the Hayes Code protocols should have some of you scurrying around for this version. It is available more freely in the USA than the UK now. Oddly, Jeffrey T. Henderson’s examination of Skull Island neglects to ask a few vital questions like The Square-Cube Law: The larger the size you give a creature, the greater the mass. So how does Kong walk around?

There must be plenty of breeding pairs on the island, so what happened to Kong’s family and there must have been more than one family to prevent inbreeding unless, of course, there’s something on the island that enlarges the animal life? The same also applies to Kong’s dietary needs. With a body that size, he has to rely on anything he can lay his hands on and you would have to ask why eating a nubile woman once in a while not mean he wouldn’t go after all the tribe. Likewise, considering how long the dinosaur population has survived there, one would have to consider evolution and why some of them don’t match our bone discoveries. Applying that would justify the changes, even if the island is too small to run such an ecology.

The final film looked at is ‘The Martian’ (2015) and how its science didn’t keep up with discoveries. That would be true of any SF film centred on our own reality in the near future. The percolates in the soil was found after the book and film and, if done now, would have to be accounted for. Ka Chun Yu’s speciality is Mars and he’s interviewed over the real thing although I wish he had a solution for removing the perchlorates from the soil or if its possible, although he addresses hydroponics. Oddly, no one questions the absurd way astronaut Mark Watney is picked up as not being that practical and not ripping his arms off.

Both sides of the fence are covered well. You certainly learn a bit more about the films. I do think a lot of the scientific aspects of the SF films chosen or at least the ones I’m more familiar with, only encompassed certain aspects than looking far more at the inaccuracies. If anything, especially with ‘The Martian’, there is a big argument about having scientific advisors involved. I think there is a misconception that a scientific advisor is there just to say no when really they will offer alternative solutions to resolve a problem.

Please remember as a reviewer, a lot of the focus is on what I would discuss with these people in person or where I would be critical. There is still a lot to learn from this book, both about films and their scientific content. I would hope Vincent Piturro does some more books along similar lines and see where the topics go. If there are films here that you haven’t encountered before then it might or might not encourage you to look them up.