If the titular character, Professor Quanderhorn, immediately suggests Bernard Quatermass, you’d not be far off the inspiration for the BBC Radio 4 comedy series, ‘The Quanderhorn Collexion’, presented in this collection. Across two serials and various extras, spanning almost ten hours, listeners are drawn into the bizarre world of Quanderhorn, apparently locked into a time loop such that it is always 1952, which is, of course, the year before the first Quatermass story was broadcast on TV, ‘The Quatermass Experiment’. 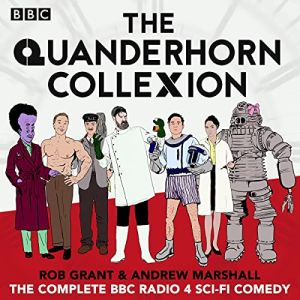 I think this connection is important: the Quatermass stories were well received at the time by the public and critics alike and went on to inspire a generation of Science Fiction writers and television show producers. But Quatermass was also a show very much of its time: Austerity Britain, a grim place that still had the trappings of Imperial power but was having to deal with the post-war realities of crushing debt, social change, and the ever present fear of nuclear war.

So, while the ‘Quanderhorn’ shows are comedies, they parody that fascinating mix of English exceptionalism and Cold War angst that inspired the likes of John Wyndham and Terrance Dicks. It plays up to that parochialism that characterised so much of the writing at the time; while the whole world may be in danger, the key players are all in England. There is, for example, Guuuurk the Magnificent, a Martian who has adopted the persona of Terry Thomas and plays the part of an unscrupulous cad to the hilt.

Professor Quanderhorn (played by James Fleet) is not-too-ably assisted by Dr Gemini Jannussen, a brilliant scientist with a part-clockwork brain (Cassie Layton), and test pilot Brian Nylon (Ryan Sampson) who is possibly a spy, but having lost his memory, has no idea himself.

The professor also has a son, Troy Quanderhorn (played by Freddie Fox), who is supernaturally strong but a complete dimwit thanks to some experimental gene editng. John Sessions rounds out the cast playing two roles, Winston Churchill, who cannot bear Quanderhorn but needs his help at times and Jenkins, the janitor, who during the war was an enlisted man who served alongside Quanderhorn, who was, of course, an officer. Socially at the bottom of the heap, Jenkins plays the time-honoured role in such comedies as being the only sane person in the room, but is loathes Quanderhorn to such a degree that his help cannot always be relied upon.

Alongside the impressive cast, the show writers are sit-com royalty. Andrew Marshall is the man behind such shows as ‘2point4 children’, ‘Whoops Apocalypse’ and ‘Wilt’, while Rob Grant is best known for ‘Red Dwarf’, which he created with Doug Naylor. Marshall is also supposed to be the inspiration for Marvin the Paranoid Android in ‘The Hitchhikers Guide To The Galaxy’ and certainly there’s something of Douglas Adams’ style to the ‘Quanderhorn’ shows.

The humour comes from the mix of farce, puns and inside jokes, which gives it a certain broad-based appeal that you’d expect from comedy originally broadcast on BBC Radio 4. If you imagine a Science Fiction remake of ‘Bleak Expectations’, a pastiche of various Charles Dickens novels, you’ll immediately know what to expect.

It should be said that summarising the plot lines between the two six-part serials presented here is all but impossible. Besides Martian invasions and time travel, there are all sorts of weird monsters and emergency rescues involving rocket ships to contend with. If you like this sort of thing, it’s all good stuff and while a bit frenetic to listen to in one sitting, the half-hour instalments work well as something to listen to on your commute. Production quality is, as you’d expect from a Radio 4 comedy-drama, excellent.

The sound is clear, there are lots of special effects and the cast is thoroughly likeable. Layton does a particularly good turn as the chief female character it what could otherwise have quickly devolved into a bunch of boys trying to out-shout each other. As it is, she brings a certain frosty charm to her role, quite in keeping with the 1950s milieu.

Overall, recommended, and certainly for the price, plenty of entertainment of a very particular sort.