If long running comic strips like ‘Peanuts’, ‘Doonesbury’, ‘Calvin And Hobbes, et al are akin to sit-coms then one panel cartoons are more the equivalent of sketch shows. While the former will often provide plenty of self-contained laughs, they also rely on recurring characters, their recognisable traits and the occasional long running story. The latter rely more on a punchline, the sharp hit of the joke and the joy of understanding. Two of the greatest cartoonists utilising the one panel style have been Charles Addams and Gary Larson.

With a unique style, they revelled in the strange, the surreal and the ridiculous. All within the space of one panel they would create diverse worlds again and again, week in and week out with a sense of the surreal and the dark. While not strictly a ‘one panel’ cartoonist, Nicolas Gurewitch has many of the touches of both Larson and Addams, but in ‘The Perry Bible Fellowship’ he explores even darker recesses of the universe. 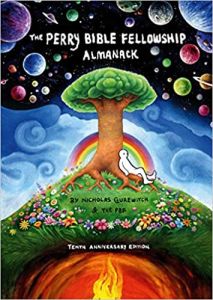 If there is perhaps an over-arching theme of the cartoons in ‘The Perry Bible Fellowship Almanack: Tenth Anniversary Edition’, it’s ‘Be careful of what you wish for.’ A boy blithely declares that he’d sell his soul for a puppy. Cue a panel of him playing with a cute puppy and then cue the final panel where our protagonist is now suffering eternal damnation.

Life within the world of Gurewitch’s work is often terribly literal and unforgiving towards the person who wants to stand out. A person is determined to fly. In the last panel, his death is reported as a suicide under the story ‘Baboon Attacks Prime Minister’. The universe laughs with a cruel irony. But this darkness is what makes ‘The Perry Bible Fellowship’ so funny, where on the ‘other side’ of cruelty, safe in the knowledge that we can revel in the misfortunes of others.

Many of Gurewitch’s cartoons contain simple, almost stick figure, characters and are replete with primary colours. They convey a certain childlike innocence that juxtaposes the often harsh jokes contained within but Gurewitch can diversify his style. There are specific homages to the likes of Larson and Robert Crumb while he there are more ornate and decorous pieces of work when the joke calls for it. There’s a constant sense of surprise, not only with the punchlines, but with the style that we’re going to be offered.

This tenth anniversary collection contains some unpublished cartoons from Gurewitch and provides a little insight into some of his thought processes. There’s also an ‘introduction’ from actor Michael Cera which is either a massive meta-joke or another example of the cruelty that ‘The Perry Bible Fellowship’ sometimes reflects.

Gruewitch only now does ‘The Perry Bible Fellowship’ on a sporadic basis and much of his mantle has been taken by the likes webcomics XCCD and Cyanide and Happiness. This makes ‘The Perry Bible Fellowship Almanack: Tenth Anniversary Edition’ an indispensable collection of work, a must for anyone with an interest in the history of cartoons and, of course, those who just like laughs. Albeit laughs often with a dark edge.