The editors, Hannu Rajaniemi and Jacob Weisman, of this new anthology, ‘The New Voices Of Science Fiction’ have set out to present the new, up-and-coming authors who they expect to see more of in the coming years. Some of them are names I’m already familiar with and others are completely new to me.

I’m always happy to see an anthology specifically on Science Fiction as a few years back there was a tendency for mixed Science Fiction and fantasy anthologies which, as I don’t particularly like fantasy, were always half disappointing. There are lots of great stories in this volume and not very much disappointment at all. 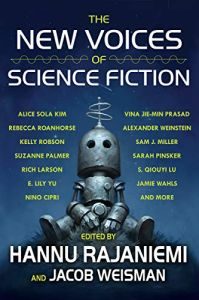 Opening the book is ‘Openness’ by Alexander Weinstein, a story that uses the well-worn trope of ‘why does nobody talk any more, they’re all on their phones all the time?’ but adds a new layer of technology that alters human interaction even more. It nicely contrasts the isolation this can bring with the over-sharing of personal information that can equally be a trap of social media even today.

Nino Cipri considers ‘The Shape Of My Name’ in a wonderfully clever story that centres on a time-travelling family who inhabit the same house for generations in an achronological manner. The plot reminded me of something that could be a Claire North novel, as well as the film ‘About Time’. I thoroughly enjoyed it.

A far future, post-singularity, virtual-reality existence is the setting of Jamie Wahl’s ‘Utopia, LOL?’ It cleverly plays with the expected tropes via the overly-excitable protagonist Kit who is assigned to welcome back an ancient, frozen man and show him the way of the world. It’s great fun.

After some kind of alien invasion/apocalypse, children try to come to terms with the loss of their families ‘In The Sharing Place’, a thoughtful and ultimately a chilling story by David Erik Nelson. Much of the narrative takes place in the therapy sessions that happen in the Sharing Place and only slowly are details of the apocalypse revealed. It’s a very effective tale.

The shady world of counterfeit 3D printing is explored in ‘A Series Of Steaks’ by Vina Jie Minh Prasad, in which the counterfeit items in question are beef steaks. It’s a vivid description of a hidden economy and the dangerous life that such an occupation involves.

One of the most fun stories of the collection is Suzanne Palmer’s ‘The Secret Life Of Bots’, told mostly from the viewpoint of a tiny repair bot on board an ageing battleship. The narrow perspective of the bot is contrasted nicely with the crew’s worries as they head off to face an alien threat, but the definition of their respective perspectives is cleverly altered along the way.

‘Ice’ defines both the frigid colony planet and the chilly fraternal relationship in Rich Larson’s tale of biological enhancements, trying to be cool and an inimical environment. Although only dealing with a single incident in the lives of two young brothers, it paints a well-realised vision of this far-off world.

‘One Hour, Every Seven Years’ by Alice Sola Kim is another time-travel story that jumps around in a slightly confusing way but gradually becomes less confusing and very enthralling. Margot absconds with a time machine in an attempt to fix her own childhood and therefore improve her life. We see the same scene played over and over with different variations each time, while her future self reflects on how she ended up where she has, weaving together a satisfying conclusion.

‘Toppers’ is the shortest title I’ve ever seen for a Jason Sanford story. It refers to those who live at the top of skyscrapers, safely above a mysterious mist that has rendered street-level New York uninhabitable. A girl called Hanger hears voices from the mist, the same voices that have led others to throw themselves from the heights. This is a post-apocalyptic tale with a metaphysical dimension and a memorable setting.

A robotic foster mother seems perfectly normal to Issa in ‘Tender Loving Plastics’ by Amman Sabet. It’s a touching story that explores what is acceptable to society and what we accept as routine, as well as the importance of human relationships.

A rather depressing world of touristic exploitation is the setting for Rebecca Roanhorse’s ‘Welcome To Your Authentic Indian ExperienceTM’. Jesse earns a living offering virtual reality Vision Quests, despite feeling that what he offers is anything but authentic. The arrival of a lonely tourist who befriends him leads to alarming developments in Jesse’s mundane world.

‘Strange Waters’ is a wonderful and captivating story by Samantha Mills, the third time travel tale of the volume and, yet again, a fresh and original take on the trope. Mika is a fisherwoman who is cast about in time by the mysterious tides off-shore, finding herself landing again and again back in her home city but each time in different eras. It’s an extraordinary, magical tale.

‘Calved’ is set in the floating city of Qaanaaq, the setting of Sam J. Miller’s fabulous novel ‘Blackfish City’ that I reviewed last year. In a much smaller word count here we’re given an intimate portrait of what life is like in this flooded, post-apocalyptic world for the itinerant workers who eke out a living in the lowest levels of society. A welcome return to this world for me.

Rather than struggling with the everyday trials of life, why not move into virtual reality full time? In ‘The Need For Air’ by Lettie Prell, one mother decides this is the best thing to do, especially for her son who has lost both of his legs. Her son doesn’t necessarily agree though. The question of who knows best is explored in light of the lure of new technology and freedom from responsibility in this effective and thoughtful story.

‘Robo-Liopleurodon!’ is Darcie Little Badger’s short but fun story about an environmental scientist’s battle against the world’s lack of inertia to solve environmental problems and the lengths some will go to in order to follow their dreams. Not much more can be said without spoiling the story for you.

Following a social revolution of some kind, half of Kenya’s population are left to their own devices, playing immersive on-line games and putting nothing in to society. In ‘The Doing And Undoing Of Jacob E. Mwangi’ by E. Lily Yu, the titular character, starts to question his carefree lifestyle and struggles against the peer pressure of his fellow gamers. It’s a gentle but curiously engaging story.

‘Madelaine’ is Amal El-Mohtar’s story of a woman whose memories are triggered by smells and sensations, leading her to seemingly travel back in time to earlier parts of her own life associated with those memories. Or perhaps she is merely intensely re-living those memories. Or perhaps her brain has been addled by the drugs trial she is on. Or maybe her mind has been affected by the death of her mother. It was minimally SFnal, but intense and evocative.

Sarah Pinsker’s ‘Our Lady Of The Open Road’ centres around a touring band struggling against advances in technology that are making live music obsolete. It’s an engaging and thoughtful tale but one of the least overtly SFnal tale in the book.

An escapee from the Moon makes his way to a remote Chinese village in Kelly Robson’s ‘A Study In Oils’. Here he joins a group of artists enjoying the countryside and takes up painting. It’s an odd set of circumstances and does a great job of exploring the dichotomy between maintaining a traditional lifestyle and adopting useful new technology.

This is a wonderful selection of stories highlighting not only some great writers, but a wealth of fabulous ideas and new twists on old Science Fiction tropes. It’s just over 400 pages long, giving a decent amount of stories to enjoy and allowing the editors to indulge themselves and include a whole host of interesting authors. If you want a flavour of cutting edge science Fiction today, this is an excellent choice of reading material. 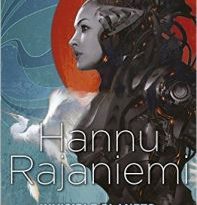 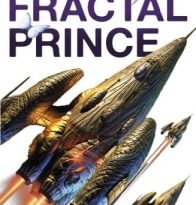 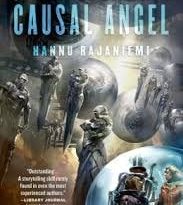