‘The City Of Brass’ is the first in ‘The Daevabad Trilogy’ by S.A. Chakraborty and is her debut novel. 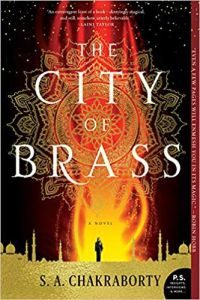 Nahri is a street urchin who gets by swindling money out of the rich by pretending to read palms and healing the sick. She knows she’s swindling them as she firmly believes that magic doesn’t exist, until she manages to conjure up a mysterious djinn during one of her cons. This djinn, Dara, believes that Nahri is a Nahid and her only way to survive is to escape her home and go with him to the City of Brass, aka Daevabad.

This book is based in Egypt and I think it’s possibly the only ‘own voice’ book of this type I’ve ever read. I enjoyed reading about the interpretation of the Muslim religion in this book, the calls to prayer, etc. It did seem to be pretty well based in the religion of the area today which was interesting.

I did find it helpful having the glossary of terms in the back of the book otherwise I feel I would have been quite lost at times as to what things were. Like for example the different clothes or foods that were being described. I did, however, get a little confused as the people in the book seemed to go by lots of different names depending on who was talking about them or to them.

I could also have done with a little more description as to the differences between the different types of people in the book or maybe just a clearer differentiation between them.

I really enjoyed the character of Nahri. She is a 20 year-old woman who seems to have some kind of magical trait of being able to sense and sometimes heal sickness in people. She is also able to heal herself completely with ease. What she wants most in the world is to go to Istanbul to learn proper medicine so she can help heal more people in a more medical manner. She was an entertaining character but I’m still confused as to how she didn’t believe in magic given what she could do.

We also get to see things from the point of view of Ali, second son of the current ruler of Daevabad. He sees that in his father’s city there is too much inequality with the rich and pure blood getting everything and those with tainted blood having their children taken from them. Ali gets into lots of trouble trying to right these wrongs he sees.

I have to admit that at plenty of times I was quite lost with the plot and found it confusing to keep a grip on who was doing what but I trusted that eventually the story would become clear. It did to a certain extent but it’s not one of the clearer fantasy novels I’ve ever read. There are definitely a lot of twists and turns and I, for one, got a little lost along the way.

Overall, this was a good start to this new series by a debut author and I’m going to want to carry on to see what happens to Nahri and everyone else in the next book.