The latest issue of ‘On Spec’ is out now with the usual variety of stories. The fiction opens with ‘Medicus’ by Robin S. Carson, a time travel story set in the Roman Empire. In the little mountain town of Augustula lives a medicus, better than most as his treatments actually work. When a stranger comes in search of him, there may be danger. The Roman background was well realised as far as I can tell and the plot was interesting as the details were slowly revealed. 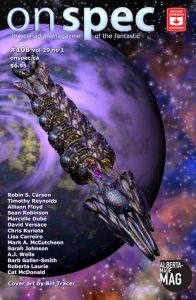 ‘Tamarack And The Stone’ is set in a weird world where technology and magic mix, mobile phones co-existing contentedly with demon stones. The latter are valuable and Tamarack, the transgender warrior wizard, is in possession of one, putting her in danger. Author Timothy Reynolds is the interviewee this month and says that he plans to use the setting for a novel in future, which makes sense.

The Irish coast in olden times is the setting for ‘Tide Child’ by Sean Robinson. Mary and Patrig McCollum are arguing again which displeases their boy, Cavan. They live on the coast near a village of fishermen and fish themselves. Cavan’s Da has some dark secret which becomes a big issue when Ma leaves and a stranger comes looking for Da. I enjoyed the prose and the atmosphere of it.

‘The Saffron Curse’ by Marcel Dubé is a great romp set in a Vancouver restaurant. Eduardo and Amanda acquired the premises cheaply because the building is supposedly cursed in some way. It keeps burning down. When Vancouver’s most powerful food critic, Eleanor Stuttgart, comes in for dinner there is much excitement, especially when she asks for Eduardo’s signature dish, Babadoom monkfish. Unfortunately, it contains saffron and they promised the previous owner they wouldn’t use it. They soon find out why it’s better not to. This was good fun.

Steampunk fantasy next in ‘A Fire Across The World’ by David Versace, set on The Thames Lady, an old steamboat. Garbutt, an agent of the British Empire, is chasing a mysterious Russian named Rusanov, who has been assassinating certain individuals worldwide by the unusual method of arson. He’s a dangerous man, his bodyguard even more so. Garbutt is baffled by the murders of people, who seem totally unconnected, but one of them was his friend, so he’s determined to get revenge. A clever fantasy with plenty of steam.

‘Dirty Sheets In The Acreage’ is the kind of far-out fantasy that sounds ludicrous when coldly described but Chris Kuriata makes it work. Sheila looks after her daughter Anna and she, in turn, looks after the acreage by simply walking through it. In so doing, she gathers bugs on her skin and snakes in her hair, she must be a big girl, so keeping the house clean is not easy. An odd piece but it sort of worked.

Finally, ‘The Cloaked Lady And The Butterfly’ by Lisa Carreiro has eighty-five year-old Edgeworth walking slowly to the gallows, condemned to death for his seditious writings against the mad queen’s rule. There’s a big crowd as he taught most of the town to read and write in his career. He’s resigned to his fate when a strange lady appears. There was a neat twist at the end.

Non-fiction includes an analysis of ‘The Last Jedi’ by A.J. Wells which more or less explains the writer’s designs and the structure of heroic fantasy sagas and very competently, too. The reminder that, like all fiction, film is a construct doesn’t do much for the suspension of disbelief. As it happens, I saw the film last week and it was okay but all it does is set up another Vader/Skywalker conflict with two new characters, an exercise in franchise perpetuation more than anything else. Must the Empire and the Republic, the dark and the light, have this fight every generation?

I have little poetry in my soul but I really liked ‘Why the Blue Whale Risked Its Neck’ by Mark A. McCutcheon. ‘Blue whales descended from pre-Socratic philosophers who walked to the sea, dropped their papyrus, she their robes and waded into the waves under an ancient Aegean sun.’ It doesn’t rhyme but it rolls along beautifully, like waves. You get the sense that a lot of work went into it. Great stuff.

Another good issue. It’s a shame that, apart from one time-travel story, there was no Science Fiction here but I guess that reflects the general trend in publishing.