‘The Caged Queen’ by Kristen Ciccarelli is the sequel to ‘The Last Namsara’, while continuing on from the end of the story, follows a different protagonist. 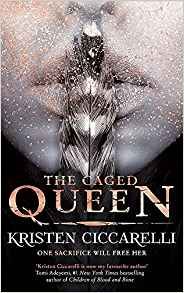 Roa married Dax to ensure that his kingdom looked after her people. For ages, Firgaard have imposed sanctions on The Scrublands, but Roa intends to use her new position as queen to make sure her people are treated right. The problem is that Dax seems completely disengaged from the issues that matter. He doesn’t listen to advice or seem to take ruling or anything else seriously. Roa is determined to make sure that she is not trapped in a marriage to a guy she doesn’t love, without seeing results for her people. But how can she achieve this and at what cost?

Ciccarelli’s world-building is extremely immersive. Her captivating descriptions make the reader really feels like they’re wherever Roa is.

Furthermore, the world is extremely well-constructed. The cultures of the scrubleders and the firgaardians are both well-developed and contrast in ways that are woven in to the story. The politics highlight some injustices that we also face in our world and are delivered in a way that’s so powerful that at one point I felt as frustrated as I would if it was something I was experiencing in real life, because of the relatability of the injustice.

Despite the world containing much injustice, the scrublanders seem to have a fairly good attempt at a moral and harmonious society, which is always good to see. Most worlds have evil within them, in fact this is often necessary to create the conflict that drives a story. Yet while many author’s will offer us a vision of the horrors of a world gone wrong and then finish the book or series with good having won and the dawning of a brighter future, few offer us a vision of what a people genuinely aiming to be good and achieving a degree of success could look like. The scrublanders are that relatively successful attempt at a good society.

Ciccarelli also includes religion as an integral part of her characters’ identities. Their belief system informs both the laws in their world and the actions of characters.

Roa is a well-developed character. She is kind, clever and determined to help her people and her sister. She shares a very close bond with Esae, her twin, who died years before the story begins, but has come back as a bird who has followed Roa around for years. The relationship between the two sisters is really powerful and well-developed. Roa’s struggles as her sister’s connection to her fades are thoroughly explored and integral to the story. The sisters have a special connection called the hum, which means that they know each other’s thoughts and feelings. This is an innovative way to explore the bond between the sisters.

My main complaint about Roa is that there are some inconsistencies in her character. While she seems wise and tactful, particularly in flashbacks to her childhood, there are large portions of the story where things are happening, yet she is not taking them in or reacting to them in a way in keeping with her character. Her relationships with her friend Lyrible and the king, Dax, also aren’t given enough attention. Ciccarelli tells us things about these relationships, but doesn’t always back them up by showing us what she’s told us.

The plot was relatively poorly constructed. It followed a structure that seemed extremely similar to that of ‘The Last Namsara’, so much so that I could predict the plot twist that occurred really early on. Most of the character consistencies discussed above seem to be in servitude of the storyline that Ciccarelli is trying to construct. Nevertheless, the quality of other aspects of the book meant that I still found the book extremely engaging, despite where it lacked in plotting.

One structural feature that did work extremely well was the frequent flashbacks and stories from the mythology of the world. These really helped to make the world-building immersive as well as provide insight in to the characters.

Overall, this is an extremely enjoyable fantasy, with a well-developed world and characters, that I would highly recommend, particularly to readers who enjoyed ‘The Last Namsara’. 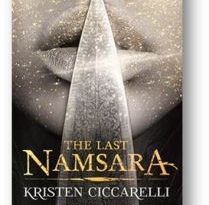