Second in the ‘Seven Forges’ series, ‘The Blasted Lands’ by James A. Moore continues where ‘Seven Forges’ left off. The Emperor of Fellein is dead and armies are gathering on both sides. Put in charge of the military aspect of the twelve kingdoms, reluctant General Merros Dulver begins to learn the truth about his empire. It’s crumbling at the edges and at the seams. The middle appears somewhat rotten, too. Crowning a new empress halts the rot for a while, lifting the spirits of the people. It’s not long before the rest of Nachia Krous’ family plot to remove her from the throne, however. They may not have to bother, as the Sooth has predicted the fall of her city. Add that to the list of concerns carried by her First Advistor, Desh Krohan. To the top of the list, over the fact a neighbouring kingdom has been reduced to rubble, leaving another bereft princess in Fellein. The black ships along the coast become more than a rumour. Patrols and scouts sent to rally allies find slaughter and ruin, but no bodies. One of Desh’s acolytes is sent to investigate the Mounds. The Sa’ba Taalor are forbidden to go there. Fellein’s foray has all the feel of a desperate act and the small troop encounters much danger along the way.

Most worrying of all is the threat of the Sa’ba Taalor. Will they come silently and swiftly to war? Will the legendary race of warriors show any mercy? They receive an answer in part, in the form of an invitation to parlay.

At this point, the story finally lumbers toward action, only to meet the end of the book, which is typical of a sequel or middle book of a series. The slow pace of ‘The Blasted Lands’, while sometimes frustrating, does accurately illustrate the speed of war. It takes time to gather an army, recruit a navy and generally flap about in panic. The Sa’ba Taalor do not flap, of course. They move as directed by their mysterious gods and, for all their apparent barbarism, their preparations for war are methodical and precise.

As with the first book, I found Andover’s story to be the most compelling. The boy with the metal hands continues his journey as ambassador. Through his eyes, we meet more of the Sa’ba Taalor and learn more about their mythos and culture. I found both to be fascinating and somewhat horrifying. They are an alien people and Moore writes them well. I did wish more time had been devoted to Andover and, by the end of the book, my wish had been granted. But, as any avid reader of epic fantasy will often lament, I need more.

‘The Blasted Lands’ ends with more questions than answers. This is not necessarily a bad thing. Each book in a series should invite the reader to move forward. I do hope that the next instalment comes with a swifter pace, however, with more war and less individual skirmish, more revelation and fewer questions. I appreciate the time taken to build a compelling world. Next, I’d like to inhabit it with the characters as they fight for what they believe in. 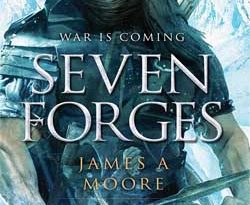