I should point out that the ‘Plenty’ in Colin Greenland’s 1990 novel, ‘Take Back Plenty’, is actually a planetary destination in the solar system, although I’m not sure if it’s a moon, planet or space station. The solar system is highly busy, full of humans and aliens, although little information is given as to how the latter got there. 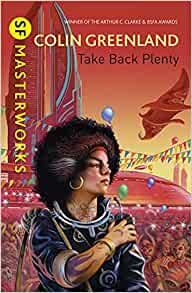 Tabitha Jute owns an AI ‘barge’ spaceship called the Alice Liddle. I know, expect a lot of easter egg references. While on Mars, she gets heavily fined and the person she was going to get a job from has already left the planet. Instead, she is hired by musician Marco Metz to take him and his band on a series of dates across the solar system and then the adventures really get started.

Much of this book is a bottle show on the Alice Liddle as Jute finds her troupe of performers have all kinds of secrets that she slowly discovers, whether she wants to or not but it also makes for a lot of spoiler fodder. What it does bring to the story is some dimensionality to the characters.

Greenland is very good with creating characters and alien species and bringing them to life. There are areas of weakness when it comes to plotting and it does become obvious as he throws them in the deep end and sometimes even abandoning them so we don’t know their fate. The last section of the book is certainly that, although two other books were released in the series.

I’m still wondering about the title as its only one of several destinations in Jute’s travels and she wasn’t keen on going to Plenty.

Until the end section, the book is certainly an interesting read.