David Barr Kirtley is joined by Tobias S. Buckell, Abby Goldsmith, and Mercurio D. Rivera to talk about Vernor Vinge’s classic scifi novel A Fire Upon the Deep, all the way back from 1992.

A five billion year old data repository in the low Transcend is the subject of an investigation by an expedition from Straumli Realm, a youthful and ambitious human civilisation in the high Beyond that holds the promise of unfathomable wealth. A latent superintelligence inside the archive eventually known as the Blight progressively compromises the expedition’s base, High Lab. Two self-aware beings produced in a manner similar to the Blight plan to help the humans before the Blight may escape, but just before the Blight’s last “flowering”. 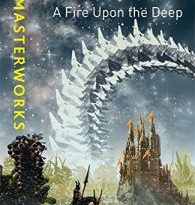 A Fire Upon The Deep by Vernor Vinge (book review).

A Fire Upon The Deep by Vernor Vinge (book review).