Okazaki-san, one of four artists who made their debuts in the independently produced Nou Nou Hau manga magazine in November 1998, sits down with Ed and Jim for an interview.

His debut manga series, Afro Samurai, was first released as a djinshi in the magazine’s introductory issue zero and served as the cover. Up until September 2002, when the magazine came to an end, Afro Samurai was serialised.

Afro Samurai was made into an anime miniseries, and then Afro Samurai: Resurrection, a follow-up television movie. Takashi Okazaki went back and remade the original djinshi into a two-volume manga series after the anime series’ debut, and Tor Books published it in the US. 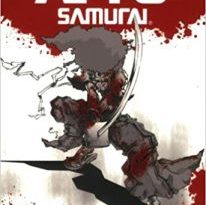