There were two reactions when I received ‘Superspy Science: Science, Death And The Tech In The World Of James Bond’ by Kathryn Harkup: no photographs although that might be down to the additional costing and looking at her comments on the magnet watch and rebreather, she wasn’t going to take any prisoners and it wasn’t a love match. Harkup clearly knows her Bond but also the problems with the technology. Well, we’ve always known that, hence my look at those two examples. Where she goes one stage further is explaining the consequences if they were real. I could reveal what she says about those two examples here but you need to read for yourself. 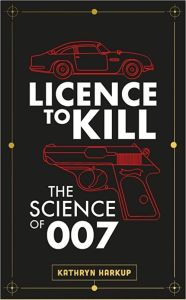 Don’t think the 25 chapters are going through each of the films individually. She mixes them and the books, especially having a long look at Ian Fleming’s life in the secret intelligence service and as a journalist so you see them in perspective. She does hit on something I realised a long time ago that Fleming would rather leave Bond dead or near it at the end of each novel but only bring him back with each new book.

The number of footnotes, at least on the pages where they are taken, is quite substantial and cross-check to future chapters where more detail on some subjects will be given. Please bear in mind a lot of my comments are reacting to what I’ve read.

It soon become pretty obvious five chapters in that Harkup is looking how certain weapon types are used and evolved over the decades. ‘Goldfinger’ was also the first film to use lasers as the real thing came out 4 years earlier. That might be questionable considering the number of SF films with ray-guns but they weren’t described as lasers.

Harkup makes some interesting points about these criminal masterminds building exotic headquarters and the acquisition of people to man them. I could add to that the reason for these places is to stay out of the way until they are ready to escalate their plans or to stay beneath the radar (often literally) when thieving spaceships and submarines. It’s more amazing that none of them, even Bloefeld, have considered removing that Bond chap before he goes after them. I wish she addressed the problem that if all these masterminds are lining up to take on the world, why don’t they clash with each other? Not all of them belong to SPECTRE after all. I would correct one thing as at a convention in the late 1970s, there was a small studio model of Stromberg’s Atlantis on the surface from ‘The Spy Who Loved Me’ that was used for distant shots.

I did have a ponder on how Drax hid his space station in ‘Moonraker’. It might be difficult to hide from radar but visually, if it was in sync with the Earth in sunlight, unlike the ISS, it wouldn’t be seen from the ground.

Don’t think the information in this book is just about James Bond. Harkup gives a complete rundown on guns, ammunition and weaponry. We all know why Bond’s baretta was switched to a Walther PPK but she points out Fleming muddled which guns go in the car and the holster needed. For those of us who write, even before the Net, we knew the value of keeping our research material close at hand to check on things. Fleming doing his typing in Jamaica and we have seen he had books in his study might not have had the right books there or recall correctly and perpetually made mistakes than correct anything. These days, there are far too many people who know more for that to happen again or just assume its in print so be true of others along the line not checking anything.

We should say something, as Harkup does, about the incredible stunts that are done in the Bond films where she name checks many of the stuntmen. I do think one of the things that needs to be addressed in the new run of Bond films is some of the things Bond really has to do to keep fit for some things and show his training regimes.

Harkup does raise an interesting question as to why doesn’t the villain simply shoot Bond than take him out by some elaborate means. I think it isn’t out of respect, they just want him to suffer, knowing he can’t get out of what will happen to him. It gives Bond that slight chance to escape which he invariably uses.

The last few chapters focus more on Bond and what kind of man he is, although not explaining how he can be active for over 60 years. I would question what she says about the first Quarrel and whether or not he survived the dragonfire in ‘Dr. No’. I think Harkup makes an assumption that he had to live to have a son, who appears later, but not that he might have been born earlier. Likewise, she only thinks Quarrel was struck by a flamethrower and just literally fire when it might have had napalm added to it, which would have been a killer.

This is a useful and knowledgeable book. Although I’ve some emphasis on questionable points these are few compared to the other informed knowledge which can be useful beyond 007’s world and applied to our world. It’s a useful book to add to your collection whether its Bond or not. Knowledge is power and its all preparation for the next Bond villain.

check out websites: www.bloomsbury.com and www.thegraveyardbook.co.uk