This is my second voyage into the murky realm of author Paul Bassett Davies fertile imagination. Sometime ago, I reviewed his SF tale ‘Please Do Not Ask For Mercy As Refusal Often Offends’ which was rather good and quirky. For my second outing I’m reading ‘Stone Heart Deep’ which is set on a Scottish island in the present time. 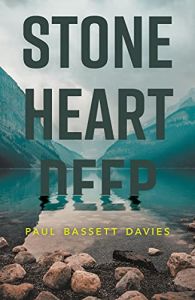 It’s quite a different type of story to his previous novel. The text on the back of the paperback cover I’m reviewing describes it as ‘a compelling and claustrophobic thriller’, which it is. What it also is is something very hard to review without giving away spoilers. There are multiple twists and turns but these happen in the latter stages of the book. What I’m going to have to be careful about is avoiding anything that hints at what these twists and turns could be.

So, the story begins with a short prologue where investigative journalist Adam Budd successfully executes yet another televised exposé and picking up the Simon Draper Investigate Memorial Prize for his efforts. A rather good evening is somewhat spoiled with a phone call to say his mother has died.

It’s not so much the death of his mother that troubles Adam as the inheritance that goes with it. He is now the reluctant owner of a rather large mansion, Stone Heart House, located on a remote but unnamed Scottish island. If you’re wondering, Stone Heart Deep is the huge loch that borders the House.

Adam’s mother was a bit haphazard in her approach to life which means that there is quite a bit to do before the house can be sold. This, of course, is best done in person, so Adam makes his way to the island. With no airstrip, the only way to and from the island is via a small ferry boat. While the ferry’s skipper is a friendly character, the same can’t be said for the islanders he meets when he arrives at the island.

One or two seem friendly but there’s a strangeness about them Adam just can’t identify. A little odd would be one way of describing them but it doesn’t do it properly. With Adam being an investigative journalist, he tends to pick up on these sorts of things. However, when the taxi he is in hits an elderly lady cycling down the hill you would have had to have been half-asleep to not notice something was not quite right.

Anyway, after an eventful journey Adam meets Harriet Baird, the island’s only solicitor who just happens to be an attractive divorcee with a young son in tow. A relationship blossoms in a very short space of time which only adds to Adams troubles as her ex-husband happens to be the islands only policeman.

Just to complicate things even more, the big multi-national company, Skandiflow, who are operating an off-shore facility a few miles from the island. The mostly Norwegian crews who come ashore to enjoy the islands only pub are the only other non-native people on the island.

I would not be doing my job if I neglected to mention the rather enigmatic Dr. Caleb Druce, the island’s GP. He is a friendly and informative character, which sort of marks him out from the other islanders Adam meets. Now that the main characters have had a mention, that’s about as far as I can go without revealing the twists and turns of the plot.

One of the strong points to this book is how things quickly build in a very short space of time to a point where something has to blow. Being set on a fairly small island limits the locations so you do get a feeling of claustrophobia. Once you have been round the island, there’s nowhere new to go.

I did find the book compelling reading. While there as one or two passages which seemed a little slow, where nothing much was happening, the tension was still being notched up a level. You knew something was going to happen but you don’t know from which direction it was going to come.

The ending is, of course, a good ending and, then again, not a good ending. It certainly concludes things in one sense but it leaves the door open to a lot of what happened next? questions. I’m not sure these will ever be answered. It all depends on the author.

In conclusion, let me state that I thoroughly enjoyed this book and recommend it as its well written and the ending is not one you can see coming. While it is not purely Science Fiction or horror, it deserves a review in SFCrowsnest due to other factors in the story which I can’t mention (cue megalomaniac laugh).