The latest CD release from Audio Text and editor Allan Kaster has chosen a scintillating collection of stories with a Steampunk theme and if you’re not sure what this genre entails, look no further than the man behind the SFCrowsnest website, Stephen Hunt, who has written extensively on the subject.

What would have happened if the electronic age did not materialise and mechanical engineering powered by steam advanced to unparalleled technical magnificence? That’s what Steampunk means to us all and yet, we are still dependent on steam for many things including the electricity running your computer at the moment. Whatever source of heat is employed, be it nuclear, coal or gas, behind it all is a generator utilising a turbine-powered by steam. The Steampunk Age is still with us! The first of the ten tales is ‘Smoke City’ by Christopher Barzak, taking us to dark satanic mills, child labour and destruction of families. It’s not long since Britain was like this!

Jeffrey Ford’s story deals with the all too common plague which once terrorised London. ‘Dr. Lash Remembers’ is about a strange plague and the attempts of a doctor to come to terms with it.

Margo Lanagan’s ‘Machine Maid’ concerns the relationship between a husband and wife plus a mechanical servant. Eternal triangle maybe not but it is intriguing!

The 19th century brings to mind Karl Marx and Friedrich Engels and it is the latter or someone rather like him who tries to organise labour relations amongst unfortunate robotic matchstick girls. A really good story entitled ‘Arbeitskraft’ by Nick Mamatas!

Sean McMullen brings together a rocket scientist and an industrial spy in the same person with a story entitled ‘NinetyThousand Horses’. A reluctant spy perhaps but does he get his revenge?

‘Tanglefoot’ by Cherie Priest is almost like a sorcerer’s apprentice. A boy creates a robot which goes beyond the initial planning to become something quite different. Not quite what was expected.

‘Clockwork Fairies’ is about an aristocratic gentleman and his relationship with a woman. A strange lady, she doesn’t want to engage in the social discourse of the day but prefers to spend her time in the laboratory. What is she up to?

‘Edison’s Frankenstein’ is a story by Chris Roberson. The title gives away the plot. Set in the late 19th century, it’s to do with an encounter with a man who was possibly manufactured.

Margaret Ronald story is about an expedition in a balloon, which takes the occupants to a strange island populated by cybermen and animals. ‘Serpent In The Gears’ is a weird and wonderful tale full of unusual encounters.

Finally, a story by Michael Swanwick and Eileen Gunn. ‘Zeppelin City’ is centred around people in an odd world, people fighting oppression with revolution in the air!

This is a really good collection of stories, narrated to perfection as you would expect from this company. An interesting selection, it provides variation within a theme and you won’t find two stories with the same plot. Released in February 2013, it provided an excellent diversion from the miserable weather hitting the UK in the so-called spring but this collection can be enjoyed at any time of the year. Definitely recommended! 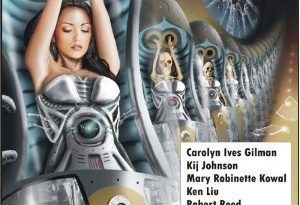 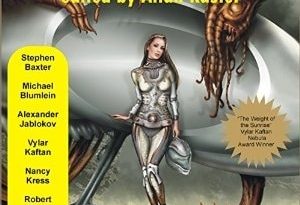 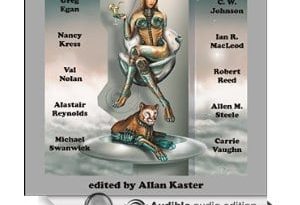