Writer-director Michael J. Bassett’s brooding and bloated fantasy adventure ‘Solomon Kane’ is rather ambitious in its fire-and-brimstone presentation. The bone-crushing and blood-splattering spectacle is indeed committed to its rousing showcase pertaining to a fearless warrior, wicked sorcerers, curvaceous harlots, revolving thrones, discarded bodies and relentlessly murky battles — all set in the background of Merry Old England. The hellish hedonism that bombards Bassett’s sci-fi/fantasy actioner does contain a majestic cheese factor that feels bombastic in scope.

Unfortunately for Bassett’s pulsating period piece, ‘Solomon Kane’ is a labored and languishing gruntfest that shows little imagination for its self-righteous stone-faced hero basking in the late Elizabethan era. Bassett’s script does not generate anything solidly unique beyond a formulaic B-movie with above average special effects and pulpy platitudes. The action-packed sequences are undoubtedly clichéd and recycled from countless other clunky sword-swinging actioners.

Interestingly, ‘Solomon Kane’ follows the recent anemic impact of its other contemporary big-budgeted blunders detailing muscle-bound pulp Neanderthals in frothy fantasyland fables. This year’s Andrew Stanton-directed ‘John Carter’ was a footnote flop earlier in the springtime. Also, 2011’s ‘Conan The Barbarian’ from Marcus Nispel failed to register a blink from disinterested movie audiences. It is any wonder that filmmakers will try to usher out another dismissive bulky swashbuckling epic in 2012. Of course, it is worth noting that ‘Solomon Kane’ was actually released nearly three years ago and is now subject to a belated North American release on the big screen.

Actually, ‘Solomon Kane’ is the brainchild of Depression-era scriber Robert E. Howard whose Kane creation appeared in the 1928 issue of the magazine ‘Weird Tales’.  Also to note is that Howard was the creator of ‘Conan The Barbarian’. Regardless of ‘Solomon Kane’s auspicious origins one cannot ignore the blatant ‘Lord Of The Rings’ shadings. Where the incomparable ‘Game Of Thrones’ rules on the small screen nowadays one would think that the kinetic grandeur of Solomon Kane would radiate effectively.

Kane (James Purefoy) is a butt-kicking Puritan in the 1600s as he clashes with opportunist zealots in the rough and tumble European countryside. A man of true religious conviction, Kane is confronting the demonic forces looking to tap into his sullen soul…a tainted soul he previously allowed Satan to manipulate. The rage is potent as he clashes and sashes his way to overcome the clutches of the Devil itself. Already feeling ostracized by his father Josiah (Max Von Sydow) and estranged from brother (Samuel Roukin0), Kane must now resolve his satanic ties and dedicate his life to wiping out the element that stand for religious scrutiny. Thus, Kane becomes a Puritan warrior as he vows to right the wrong and devote his cause for the victimized.

The thought of joining up with a pilgrimage of Puritans (along with the late Pete Postlethwaite as the group’s leader William Crowthorn) as they set their sights on the New World felt ideal for the contemplative Kane. However, America’s shores will have to wait until Kane tackles his tacked-on damnation.

When a diabolical sorcerer named Malachi (Jason Flemyng) declares a chaotic reign on the region as his bloodthirsty followers savagely terrorize the villagers while leaving the area in ruin, Kane goes on the warpath to protect his home and its periled people. Thrown into Malachi’s carnage is the kidnapping of a damsel in distress named Meredith (Rachel Hurd-Wood) which gives Kane an excuse to act as a slaughtering romantic rescuer for the abducted saucy sass.

In truth, S’olomon Kane’ drags along as a raucous redemption showcase bogged down in dreary-looking CGI grainy sheen. Purefoy’s dour turn as the conflicted Kane has all the charisma of a knight’s rusty shield. Tediously executed, the one-note antics of destruction demonstrated in Bassett’s rancid romp predictably marches onward as the foggy-style set pieces appear distracting and bothersome. The aimless debauchery that is patched onto the basic good vs. evil sentiment does not elevate the excitement or enliven the wish-washy theological undertones.

Purefoy’s pumped-up pilgrim warrior scowls as he wields a mean sword in defiance and dependence. But for moviegoers first encountering the mucky massacre that 2009’s ‘Solomon Kane’ offers in meager eagerness, they too will have a reason to scowl but for other unrelated reasons. 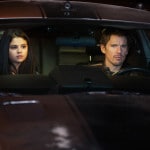 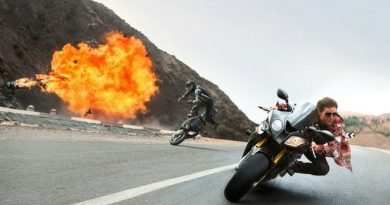