‘Shrouded By Darkness: Tales Of Terror’ is a charity horror anthology released in 2006 which featured a few big names such as Neil Gaiman and Ramsey Campbell, alongside other not so famous but nonetheless talented and award-winning writers. All of them donated the stories freely to raise money for DebRA, a charity working on behalf of people with the genetic skin blistering condition Epidermolysis Bullosa, a real-life horror. Onto the stories. 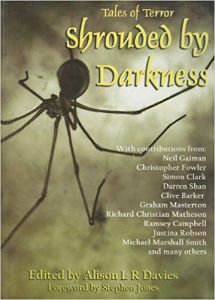 Tim Lebbon could have written a novel in which a magician chases his evil apprentice across a drought-stricken Britain to stop him causing rains of frogs and scorpions in a futile attempt to bring proper rain but he didn’t. Instead, he gave us the dramatic last chapter confrontation between the two as a short story entitled ‘Hell Came Down’ a terrifying tale of guilt, madness and hard times in Usk. I loved it.

A native American graffiti artist called James Raven, nickname Crow, uses freight trains for canvas. One morning, he finds another guy from the reservation dying by the roadside, left there by bad cops. A man’s gotta do what a man’s gotta do and this cries out for vengeance. ‘Making A Noise In This World’ by veteran fantasist Charles de Lint is a thoughtful story about what a man’s gotta do, which isn’t always what you expect. I enjoyed this a lot, partly because the savages weren’t too damned noble.

‘Going Bad’ by Alison R. Davies is about a woman with terrible periods who thinks she is going bad inside. Complications arise when she gets pregnant. I guess you have to be a woman to get the full horror but it was gruesome enough for a male reader.

‘Neighbours From Hell’ by Graham Masterton takes protagonist Jimmy from Fort Lauderdale, where he’s working, to Chicago where his grandmother is dying to New York to stay with a cousin and finally to Charleston. His grandmother raised him and, after her death, he is haunted by a boy screaming ‘Mommy, you can’t! Please, Mommy, you can’t!’ and the screaming always seems to be from the house next door, wherever he goes. A fairly routine ghost story with a true horror at its heart but well told. There’s a boss ‘with a face like somebody had been using a pumpkin for a dartboard’ and a nice girl ‘who thought the capital of Florida was ‘F’’. Masterton is a slick professional who delivers entertainment.

‘Of The Wild And Berserk Prince Dracula’ by Paul Finch seems too obvious. Kate, aged thirty-three, does a night school course in European studies to occupy her mind while she’s living in a refuge for battered wives. The tutor is mad keen for Vlad the Impaler and also doing the course is an old-fashioned, charming Romanian gentleman called Grigori Slaken who takes Kate out for dinner. Ho-hum. We can see where this is going. But you can’t, quite. An accomplished piece of work.

‘Feeders And Eaters’ by Neil Gaiman is so horrible it makes you feel ill but I guess that’s the idea. A man bumps into an old acquaintance, who’s now a physical and mental wreck and listens to his terrifying tale. It worked but not in a pleasing way to me. One for strong stomachs.

I love black humour so ‘Cutting Criticism’ by James Lovegrove is probably my favourite story here. It’s in epistolary format, letters from the editor of the ‘Incisive Comments’ website to a murderer who always kills on April first and sends in witty photos of his victims. A fellow of infinite jest! Clever development and wordplay. You can sort of guess the ending but it is beautifully delivered.

I have a history of disappointment with Ramsey Campbell, who often features in horror anthologies because they like his big name on the cover but doesn’t seem to produce anything special. However, ‘One Copy Only’ is excellent, possibly because it deals with one of his true passions: fantasy literature. An old man finds a second-hand bookshop in a rough part of town that seems to be perfect. Nice sense of mystery and a great ending.

Some writers put a bit of weird in a normal modern setting and use the story to comment shrewdly on real life today. This is great as long as the weird element is at the heart of the story, not just tacked on so you can make a sale to a fantasy market. ‘An Old Passion’ by Storm Constantine is a fairly run of the mill ghost story but entertaining in the way it gets the realities of life in an English village.

‘Walking Wounded’ by Michael Marshall Smith is a weird story of a man who, shortly after moving to a new flat, begins to develop wounds on different parts of his body, like stigmata, for no apparent reason and also shows what life is like for a couple in modern London.

‘20-20 Vision’ by Debbie Bennett addressed the very modern issue of the housing shortage in Britain through the eyes of a likeable female protagonist and two unlikeable men. It was well-written and entertaining but I thought the basic premise didn’t make any sense. If a government wanted to do this there are easier ways.

‘Mannequins’ is by Mark Samuels. The first person narrator is fascinated by a building he can see from the window of his own office where he works as an architect. It’s 27 floors with an exterior of green dark glass and there may be something wrong with it because no business stays there very long with staff falling prey to some mysterious malaise. One day, it hosts an exhibition by performance artist Eleazer Golmi: ‘Mannequins in aspects of terror.’ In vocabulary and tone, this had the feel of one of Lovecraft’s New York stories. A masterpiece.

I also enjoyed the grim coroner in ‘The Heart Of New Orleans’ by Poppy Z Brite, another good city story. Even though the central premise didn’t really grab me, I liked the writing enough to enjoy the ride. Rats taking over London is not new but ‘Seven Feet’ by Christopher Fowler makes it personal with a man whose wife goes mad. Her family are religious nuts who look after their own, in a way.

Modern horror fiction attracts literary writers who want to say something about modern life. If the comments are interesting and the writing is beautiful but the weird thing doesn’t work but it doesn’t always matter, as long as there’s some sort of denouement. A short story doesn’t take up much of your time and atmosphere can be as important as the plot. All in all, this is an enjoyable collection, certainly no real turkeys. It’s out of print now but you can buy it used and make a donation to the charity if you like. Oddly, the used paperback edition is much more expensive in the US than the UK but the second-hand book market is mad now.

Telos informs me that this book is still available from them as a paperback for £ 3.99 (UK).