The best way to sum up the plot of Danny Tobey’s novel, ‘The God Game’, is a gang of five semi-delinquent university students called the Vindicators encounter a chatbot who declares it’s God with a capital ‘G’ and wants them to perform certain activities or risk being killed. Not a benevolent God obviously, more so as it knows things about their personal lives and can blackmail them.

The first quarter of the book establishes the characters and their decision to go ahead with the game. Mind you, they aren’t exactly given much choice as it appears to be interacting with regularly reality and some rather violent incursions from other teams ordered to hit them from time to time. There is a reward principle going on here, providing you follow instructions. 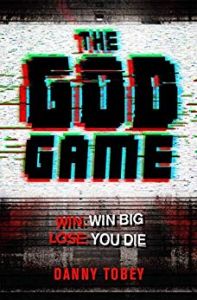 The real problem with this story is Tobey tends to focus more on the group interplaying or individually then the menace of the software program pursuing them. As such, it tends to dilute the menace and leaves too much time to think the most obvious question, why are you still playing? Granted this program is blackmailing you but even the reveals are deniable. Had this been heightened more, you would feel a greater threat. One of the group does quit to his cost but the threat is diluted in too much dialogue and normal life that hides the danger.

It becomes more obvious that and something dialogue can’t fix when members of the team are injured and there is no emotional impact on the team and are just going through the motions. You’ll notice I haven’t given name to any of the characters and that is mostly because they are interchangeable.

One of them is female and you you’d be hard pushed to know it, let alone know she is dating one of the other members of the group. Tobey has an obvious love of dialogue but it does lack emotional content for you to care about the characters. As this is Tobey’s first novel, one should expect some things not to be totally right but this should have been caught at the editorial stage.

The same also applies to the software ‘God’ that is ordering them around. Considering that it is actually the star of the book, we rarely see or read its instructions and is always put in the background. Not a good sign for a Science Fiction novel when you need to see the threat putting pressure on the characters.

For one of the team to suddenly pull out some code to set fire to a mobile phone and yet we never see anything of their prowess in computer programming also feels weirdly wrong. Things like that need to be established, more so as it’s likely to have some effect on the way they deal with their lives.

As I said, Tobey’s strength is in his dialogue but it does swamp everything else out and I’m not really sure if SF is his genre.