This two blu-ray disk collection from the BFI is described as ‘A compelling BFI Flipside compendium of strange, striking, thrilling, horrific, eerie and eccentric short subjects’. 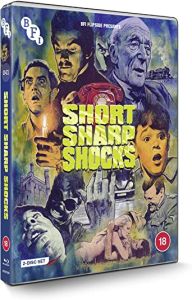 So, the scene has been set. Lights down and roll the film (er, disk)…

Disk 1 has 5 films and 3 extras; ‘Telling Tales’, ‘Arthur Dent And Adelphi: Films In The Family’ and, lastly, the ‘Tell-Tale Heart Image Gallery’.

Death Was A Passenger (Theodore Zichy, 1958)

Portrait Of A Matador (Theodore Zichy, 1958)

What we have here is a collection of rather spooky monologues in black and white from the 1940s to the late 1950s. They are films from a different age and even a different century. I’m not sure if black and white films will resonate with today’s buying public it is difficult to tell. Perhaps the older films on disk 1 will struggle the most.

The first two films, ‘Lock Your Door’ and ‘The Reformation Of St Jules’ by director Anthony Gilkison, star the venerable Algernon Blackwood who was born in 1869. Imagine that. Its 152 years ago from today’s date. Both tales are told by Blackwood attired in a traditional 1940s three piece suit. They are both shot in what I think is an early TV set designed to look like a reception room of a large country house. A setting which compliments Blackwood’s style of delivery.

‘Lock Your Door’ is a mildly spooky tale which starts with a railway incident and the tribulations of a woman who’s somewhat obsessed with locking the bedroom door. That might be wise in the real world but isn’t a lot of use when dealing with the spirit world.

‘The Reformation Of St Jules’ is shot in a similar format although the lit fire has been replaced with a floral display. Blackwood occasionally changes position and, at one point, lights his pipe. This is traditional storytelling which would have worked just as well on the radio. Of the two Gilkison films, I think this is the stronger. The tale is quirky rather than spooky and involves writing in the sky. There’s a good twist at the end, too.

I watched ‘The Tell Tale Heart’ several times as it is a rather good production of the Edger Allen Poe story. It stars Stanley Baker who gives a terrific performance. It’s a much more dramatic production than the two Gilkison films which perhaps hints at the pace in development of film direction and photography techniques in the four years between the films.

The last two films on disk 1 ‘Death Was A Passenger’ and ‘Portrait Of A Matador’ are by director Theodore Zichy and bring us up to 1959 which seems a bit more recent. Of the two, ‘Death Was A Passenger’ get my vote as the standout film on disk 1. Without introducing any spoilers the plot can be summarised as a chance encounter on a train with a nun triggers memories of a wartime incident on another train in Occupied France. I wonder why trains, nuns and odd stories work so well together.

‘Portrait Of A Matador’ is an anguished tale of an artist who seems to be haunted by his own painting. Admittedly, it is of a matador who died just after the painting was finished.

The first extra on this disk is ‘Telling Tales’ with Kate Lees of Adelphi Films Ltd. describing how she managed to recover the film which had been lost for quite some time. Kate Lees tells a very good tale which is worth watching in its own right. Kate is the granddaughter of Arthur Dent. In this extra, ‘Arthur Dent And Adelphi: Films In The Family, she gives us the background story of her grandfather and how he became involved in films. It’s a rather astonishing story and another item that is worth watching in its own right.

The ‘Image Gallery’ opens with a picture of the Certificate of Registration of the film. Its dated the 9th of January 1954. An odd thing but it gives the registered length of the film as 1,839 feet. The mathematically inclined will be able to work out how many seconds of screen time that equates to.

Disk 2 has 4 more films which I must admit surprised me. Not so much the films but the dates they were filmed as I would have thought the demand for these short British films would have dried up by 1960. They would have not have gone well with the blockbuster films coming out of Hollywood in the 1970s.

These films do however have colour which might be seen as an improvement over the collection on Disk 1.

‘Twenty Nine’, directed by Brian Cummins, is a rather intriguing tale. People who wake up but don’t know where they are will recognise this although it’s a more extreme version. It’s worth watching just to spot the actors who went on to become well known.

While ‘The Errand’, directed by Nigel Finch, is also a good short film worth watching, the standout film on Disk 2 has to be ‘The Lake’. It is an odd but gripping spooky film. I was going to say horror film. but that’s not the right term. A more fitting would just be ‘scary’. That’s about all I can say about it without giving the plot away. That’s an inherent problem with reviewing short films.

Caution may be advised when watching ‘The Sex Victims’ as it contains full frontal nudity (well it is the 1970’s after all). The male leads Ben Howard and Alun Armstrong both went on to have long and distinguished acting careers, although Armstrong is probably the better known. The female lead, Felicity Devonshire, gave up acting, started a property investment business and became a millionaire.

The extras on this disk are:-

Splashing Around (2020, 15 mins): interview with Julie Peasgood, star of ‘The Lake’ and ‘House Of The Long Shadows’.

Gallery of the original short story ‘The Errand’

The ‘Short Sharp Shocks’ collection is really a wonderful collection of British short films. The BFI should be commended on bringing this collection together.