Film-maker Diane Bell is a Sundance film winner with her film, ‘Obselida’ (2010). What she gives in this book, ‘Shoot From The Heart’, is the information of the realities of making an independent film on a budget of $150,000. I’m not sure how much of this can be translated into how do it this in places outside of the USA but the blueprint here should certainly help in planning your time and budget and avoid some of the problems of waiting for film companies to come back to you and go your own way.

What Bell does here is she shows how to become pro-active in the pursuit of turning your dream of making a film into reality. Indie films rule and there are plenty of places to be seen than the standard cinema. 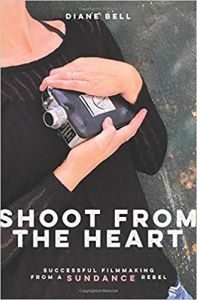 I think one of the most telling things here is don’t make you script too expensive to film, although I think that should be built in from the start and actually have several cut-down script versions that you can adjust to your budget. I often think that new scriptwriters being told not to think about budget isn’t sensible when I was approached once. If you know you have to work within the confines of a budget then the script will be leaner from the start or at least money put where it’s needed. Having an imagination is fine but it can waste time as well.

Getting experienced and enthusiastic people to help you is essential. If anything, Bell re-enforces that a good director has to be a good-hearted general with a plan that works.

There is one area of getting funding which you’ll read in the book that your investors might not want to know about but seeing how to arrange funding is quite revealing. If you want to keep ownership, just don’t go to the film studios. One thing I did find missing is the need for covering the cost of going to every film festival to promote the film as that must also be expensive. The festivals are covered towards the end of the book and they are world-wide with a couple in the UK. Fortunately, you don’t have to go to everyone and Bell notes the important ones.

Let’s go back a few chapters. Bell notes how a director should work with actors is required reading and how to make the best of what they prefer than doing what you think you want. At the end of the day, it’s important to get the right shots. Anything else isn’t likely to end up in the film.

Editing the film has similarities to how to edit a conventional story. Take a break from the film for a week and look at it with your film editor with a fresh eye and be prepared to make a cut that works, even if it might work against the original script and taking out scenes that you thought were OK.

Again, this is a telling chapter and this rationalises where you often hear about actors saying their parts were drastically cut. Film-making is a harsh world and I suspect, as Bell points out, that even in low-budget films if everyone enjoys making and learning from it, then the rest is up to its makers to make a film that might actually make a profit. The real trick with any editing is knowing when to stop and that is always a learning experience.

The notes on what to do about reviews does make a lot of sense. Don’t get over-sensitive about them and certainly avoid the ones who want to hear their own voice than review the film. Quite how to spot those without reading them isn’t explained but you should develop a thick skin. From my perspective, some of us can spot flaws and explain them but SFC has some honest finesse in doing that.

It does make me wonder if Diane Bell will read this review? I prefer to review the material that is in front of me not what other people have said about it. Sorting out the diamonds is part of the job. This book is actually a diamond. I don’t want to be a film-maker, but even I came away from this book thinking if I followed the advice here, I might be able to get a film made. Whether if all of this of this can be done in different countries is something only you can find out but so much is useful here, you’ll have a well-read copy by your side all the time.