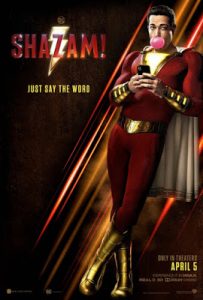 The Marvel Comics Universe won’t lose sleep anytime soon in terms of its dominance at the box office. Nevertheless, they should keep one eye open as DC Comics took a major baby step in showing what it can provide on the adventurous big screen with their latest entry into the offbeat super-hero sweepstakes. There have been many lukewarm attempts for the DC brand to rear its frothy escapist head. Now the potential to shine is realised in director David F. Sandberg’s engagingly cheeky and robust popcorn pleaser ‘Shazam!’.

Sandberg (‘Annabelle: Creation’, ‘Lights Out’) oversees an infectiously impish action-adventure that dabbles in its gentle subversive overtones that cater to the youngsters and grown-ups alike. Sandberg and screenwriter Henry Gayden (‘Earth To Echo’) has a glorious time sarcastically winking at the ubiquitous super-hero traditional conventions as the offbeat ‘Shazam!’ caters to the off-kilter imagination. Invariably, ‘Shazam!’ is good-natured in its looseness as it takes silly-minded shots, particularly at its own expense as well as poking fun at Shazam’s biggest DC stablemates, Batman and Superman.

By the same token, Sandberg is not opposed to levying some darkened tension to flip the script a bit. Some may have issues with ‘Shazam!’s indecision to either play it as a farcical super-hero saga or a SF/action adventure with underlying seriousness in its arsenal. Still, ‘Shazam!’ gets away with its undeniable charm despite the inconsistencies in thematic tone. Interestingly, DC’s ‘Shazam!’ is very reminiscent of Marvel’s naughty-minded trickster Deadpool. Hey, why not borrow from the best, right?

Super-hero comicbook enthusiasts know that nearly nine decades ago the Mighty Caped Cad went by the name of Captain Marvel but legal entanglements left the character nameless for the remaining existence of time. Also, causal fans know the myth behind ‘Shazam!’ that tells the familiar tale of 14 year-old teen Billy Batson (Asher Angel) whose exclamation of the catchword ‘Shazam!’ turns him physically into an adult (played with loaded zip by Zachery Levi).

Billy’s sordid backstory is such that he ends up in foster home care after losing track of his mother in an amusement park crowd. Thus, poor Billy Batson is bounced around from one foster home to another without any resolve in finding a solid place or sense of family. Thankfully, he will encounter a few merry misfits along the way such as his current geeky super-hero fanboy sidekick Freddy Freeman (Jack Dylan Grazer). Eventually, Billy will be rewarded for his kind efforts in protecting the vulnerable Freddy from the local bullies that needlessly taunt him.

Enter the Wizard (Djimon Hounsou, ‘Serenity’). The Wizard bestows upon Billy the uncanny mystical power to turn into a grown-up super-hero with the aforementioned urgent utterance of bellowing ‘Shazam!’. The red tight-wearing adult super-hero appears as a slimmed yet reasonably muscular specimen but his questionable mentality is still child-like…specifically echoing Billy Batson’s juvenile mannerisms.

As the popularity spreads for the strong yellow lightening bolt-chested champion, there is one deviant waiting in the wings to confront young Billy’s alter ego heralded hero. The dastardly Dr. Thaddeus Sivana (Mark Strong) is the defiant ultra-sinister source that wants to hastily rob Billy’s manly super-hero of his extraordinary super-talents in an effort for him to take over the world. Can Billy Batson’s rugged rogue match super-powered wits with the sadistic Sivana despite trying to handle the favorable limelight from the adoring curious public? Will the simplistic savior prevail with or without the struggles of the transformation process Billy Batson must endure on a chanted whim?

‘Shazam!’ strategically sticks to its formulaic foundation as Sandberg insists on spotlighting the man/boy conflict within Billy Batson and his chippy, costumed caretaker of justice. The suggested irreverence and creepy intrigue are thrown against the wall and the result is surprisingly solid as gingerly conceived in its feverish frolic. The intermittent goofs, staged showdowns and bouncy messaging about self-discovery, innocence, belonging and personalised worthiness both as an impressionable youth and as a flawed man of capable means truly works it thoughtful, wacky magic.

At times the refreshingly breezy ‘Shazam!’ can be spotty in its sentimental circles and the animated whimsy regarding the charged confrontation involving random beasts and other cynical riff-raff drags a bit. Subsequently, the patchy areas of the film’s lapses are redeemed by the energetically playful performances shared by Angel’s Billy Batson and Strong’s relentlessly unctuous Dr. Sivana. Both Hounsou’s mysterious Wizard and especially Strong’s demonised Dr. Sivana add chaotic atmosphere to the peppered proceedings.

In any event, ‘Shazam!’ is a heroic hoot for the ages. This is an encouraging starting point for the DC Comics Extended Universe to find its stride and prove that it does not have to sit on the sidelines and play third string on the bench to the entertaining Marvel machine that effortlessly strut their flashy cinematic action-packed stuff.