Luscious and skillfully presented, filmmaker Tim Burton’s ‘Frankenweenie’ is a highly exquisite black-and-white stop motion animated 3D creepy caper that radiates in wicked-minded wit and wonderment. Clearly, ‘Frankenweenie’ may be Burton’s most imaginative and gorgeously playful films in many years.

As an obvious tribute to the classic creatures of yesteryear in retro cinema, ‘Frankenweenie’ is based on Burton’s 1984 half hour Disney live action short. The movie’s premise caters to the familiar theme regarding a lonely boy and his trusty resurrected dog. Curiously, Disney never capitalised on Burton’s amusing mid-eighties gem that merely served as an appetiser for the slated feature being played. Quirky and ghoulishly offbeat, ‘Frankenweenie’ resonates as convincingly spry and devilish animated treasure that employed the same kind of impish and stylish irreverence incorporated in previous known Burton dandies such as ‘The Nightmare Before Christmas’ and ‘Corpse Bride’.

Of course, a Burton-inspired film would not be identifiable without his usual crew of performers that are a who’s who of the erratically gifted moviemaker’s on-screen brigade. Among the ‘Burton bunch’ providing the viable voiceover work includes past go-to mainstays such as ‘Mars Attacks!’s Martin Short, ‘Beetlejuice’s Catherine O’Hara and Winona Ryder and ‘Ed Wood’s Oscar-winning veteran Martin Landau (a notable revelation is that Burton left out leading mainstays Johnny Depp and Helen Bonham-Carter out of this particular project).

Burton, who co-wrote ‘Frankenweenie’ along with collaborating scriber John August (‘Dark Shadows’), has kept his personal promise to reinvent his aforementioned treasured 1984 ditty into a full feature. Thankfully, he does not disappoint as ‘Frankenweenie’ is fabulously strange and pleasantly grotesque in its weird conventions ode to the glory days of heralded horror nostalgia. Indeed, ‘Frankenweenie’ is gloriously ripe with cockeyed characterizations, oddball alienation and oversized bug-eyed protagonists with limp stringy, ball-shaped bodies. This is definitely a welcome back to Burton-oriented filmmaking at its orchestrated giddiest.

Ten-year old Victor Frankenstein (voiced by Charles Tahan) is an anti-social youngster residing in stormy-prone New Holland. While constantly confined to his attic, Victor adores the hobby of making homemade disaster movies that routinely star his bull terrier dog Sparky. Besides Sparky, Victor has another companion that shares his gloom-and-doom outlook in the neighboring Elsa Van Helsing (voiced by Winona Ryder). Elsa is related to the insufferable mayor of the murky town.

Victor’s concerned parents (reunited former SCTV co-stars Catherine O’Hara and Martin Short) are puzzled by their son’s lack of normalcy. In other words, Victor does not seem to maintain the expected sporting interests as the average boy his age. As a result of Victor trying to masquerade as a ‘normal’ youth upon his parents’ suggestion, poor Sparky is run over by a car and perishes much to the dismay of his teen owner.

Since Victor is a budding young scientist and takes the advice of his equally peculiar science teacher Mr. Rzykruski (voiced by Martin Landau channeling his Bela Lugosi dialect from ‘Ed Wood’) the eccentric youngster decides to duplicate an electric current experiment that his academic mentor demonstrated with a deceased frog.

So Victor successfully revives the lifeless Sparky, after retrieving him from the pet cemetery as the electrolysis experimentation works. Now Sparky — covered in assorted patches and stitching — is among the living but Victor must keep him isolated as his walking doggy dead buddy could draw suspicion and ruin the secret of bringing passed away pets back to life.

Can Victor prevent the neighborhood kids from performing the same miracles to their animal corpses that may end up in an uncontrollable invasion of spooky-looking varmits ruling the region? The answer is no, courtesy of a curvy-backed blabbermouth in the pun-inducing named E-Gore (Atticus Shaffer) that decides to share the forbidden news with prying classmates.

Burton fans will ultimately discover the familiarity of flourishes in ‘Frankenweenie’ that incorporate off-the-cuff references that range from his filmography ‘Edward Scissorhands’ to countless other live and animated influences that emanate from the flamboyant filmmaker’s creativity. The creep factor is persistent but sweet-natured and joyfully wacky. Even when Burton regurgitates his recycled bits to charge ‘Frankenweenie’, it is still an enriching showcase to behold.

The haunting humor is bombarded by freaky displays of clever in-jokes involving huge rampaging reptiles (a grinning nod to the campy Japanese monster movies of the 1950s), innocuous household critters turned into beastly menaces such as cats and hampsters, the standby presence of matinee menaces pertaining to werewolves, vampires and mummies and the overall juiciness of Burton’s twisted world of surrealism.

In step with this year’s earlier released ‘ParaNorman’, the lively and loony ‘Frankenweenie’ will capture the upbeat heart and soul craziness of Burton’s flashy and flaky playground of absurdity. Sophisticated and colorfully conceived, this energetic narrative about an off-kilter adolescent and his ragged tail-waving terrier may seem simplistic in concept but still makes flimsy fare such as the synthetic H’otel Transylvania’ look like a clueless computer-animated afterthought. 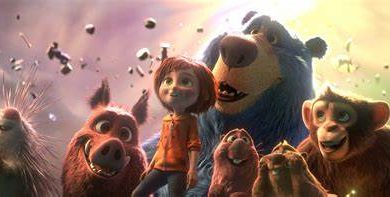 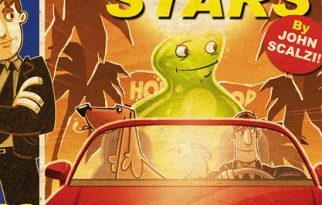