Dominic Dulley’s debut novel ‘Shattermoon’ is a non-stop, action-packed space opera that’s full of entertainment and all of the classic ingredients of adventure you might want. On the surface it’s a regular mix of bandits, smugglers and imperial navy ships with a sassy heroine, but it quickly takes on a character and charm of its own. 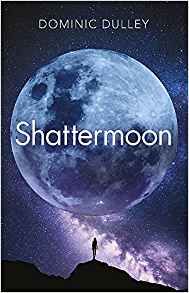 The background setting is the Ascendancy, a wide-spread empire of human-inhabited worlds with an aristocratic upper class. There’s an enigmatic alien species somewhere in the mix and plenty of seedy backwater full of criminal gangs and bounty hunters. Orry’s family run scams on the aristocratic families but, at the start of this novel, an elaborate sting doesn’t go to plan and Orry’s life soon spirals out of control in a series of chases, adventures, dangerous deals and crazy plans revolving around a valuable pendant that tumble from one to the next with barely a pause to breath.

Orry falls in with some random characters along the way. Grizzled loner Mender and his veteran former warship the Dainty Jane, who has history with various raiders and criminals, ends up going along with Orry because initially they have the same aims, but as life gets more complicated his calloused sense of honour starts to emerge. Aristocratic Harry, intent on adventure, full of charm and chivalry but naïve and spoiled, also hitches a lift and gets himself involved for his own reasons. As Orry and her companions clash with a self-important Count of Delft, the Imperial fleet, a criminal overlord and the alien Kadirin, their whole lives become crazy. Dominic Dulley does a fine job of maintaining the balance between ridiculously over-the-top chaos and compelling, fast-paced action with relatively reasonable reasons for the ongoing drama.

Some of Orry’s foes were a little stereotypical and one-sided in their villainy, while there was a whole host of minor background characters who all added some interest and rounded things out nicely. There were occasional passages where I felt the plot could have done with taking a breath, where some arrivals and encounters were a little too coincidental, but I couldn’t help enjoying the ride.

The Shattermoon itself is a fabulous place, an ancient moon that was blown apart by the unexplained powers of a vanished ancient race, but held together in a partly-exploded sphere. The potential power contained within relics of this ancient civilisation also runs through the plot, tying together the varied and vying parties.

Overall, I found this to be a breezy read and highly enjoyable. A sequel is due out soon, entitled ‘Morhelion’ and I have a feeling it will prove to be just as gripping. 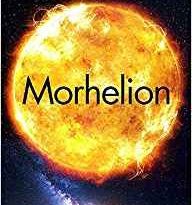