See is one of the first big TV series to be coming out from Apple TV, and of course, it’s science fiction.

This is high concept stuff, set in a dystopian post-collapse future.

Humanity has lost its sense of sight and the USA could best be described as a bunch of natives living American Indian-style, but blind, among the ruins of all their lost technology. Why? A plague virus? A bright comet? An orbital weapon with radioactive sight-blinding whatevers? Hey, where are the Triffids?

Mankind’s main religion is that we were destroying the Earth, so mother nature blinded us to allow the world to survive. This is a bit of a problem when a set of twins with sight is born to a tribe (led by warrior Baba Voss, played by Jason Momoa, and it’s his kids), and they have to go on the run, pursued by everyone else trying to “Kill the Evil!”

From the same bods that brought you the recent Planet of the Apes movies (which is why this kind of reminds us of that franchise).

Coming November 1st to the Apple TV app with an Apple TV+ subscription. 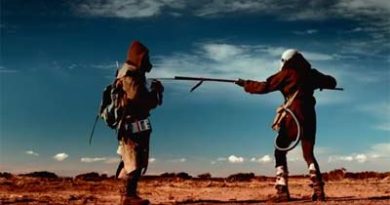 The Road by Cormac McCarthy.