I doubt if anyone interested in our genre is truly expert in all aspects of Science Fiction anymore. You would need unlimited time, insomnia and an open-ended chequebook, not to mention a good memory. ‘Lost Transmissions: The Secret History Of Science Fiction And Fantasy’ really focuses on the more obscure information or things you might have heard about but not the current state of play in Science Fiction.

With SF, we are always widening our knowledge base with some of us only claiming expertise in some areas. Be prepared to look around for availability of material as you read this book in case you want to track anything down. There are also a lot of failures noted here as well and from some recognisable sources. The subject topics are ‘Literature’, ‘Film And Television’, Architecture’, ‘Art And Design’, ‘Music’, ‘Fashion’ and ‘Fandom And Pop Culture’. I’ll pick out some highlights. 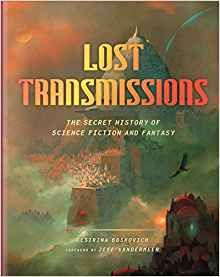 If you thought Mary Shelley’s ‘Frankenstein’ was the first Science Fiction book, needs to go back to 1593 and Johannes Kepler. As he was going to get into trouble and possibly being executed as a heretic for suggesting the Earth rotated the Sun, he first put his ideas in a novel called ‘Somnium’, although I doubt if you can get it in the original Latin. There is a CreateSpace edition out there but I doubt if many of us, myself included, have ever thought to read it.

It would be less surprising to know that famous authors had a failed or incomplete book that never saw print. For Jules Verne, it’s ‘Paris In The 20th Century’. C.S. Lewis died before completing his last novel, a time travel story, called ‘The Dark Tower’. I do wonder more about the final ‘Dangerous Visions’ anthology edited by Harlen Ellison, though. He bought a lot of stories for it and from the accounts here, it would have to be a massive multi-parter if ever released but you would think his estate would be looking at it as a viable project a year after his death now.

Some Science Fiction elements have played heavily on influencing our reality. I hadn’t realised that the lesson learnt from the 1983 film ‘War Games’ was to beef up the American NORAD computer security against being infiltrated. Somewhere down the line, this must also have affected why we all use anti-virus software. Something else to add to your argument with explaining to non-fans why there is an important need for Science Fiction in our reality.

The reason the likes of ‘Lord Of The Rings’ has maps is because it helped the authors to gauge distances and travelling times. Oddly, Narnia isn’t included in the examples. Read this section with interest if you’re planning a fantasy realm as it might save you problems in any quests

I do have issues when something like ‘Space: 1999’ is obscure when it’s available on DVD. Something like the 1970 Australian SF TV series ‘Phoenix 5’is obscure if you can remember that far back. A promising pilot episode let down by a cheap budget that would make the original ‘Doctor Who’ look expensive. However, if you want to know more about Rudi Gernreich who contributed the costumes to ‘Space: 1999’, he is covered and, yes, I recognised his name from the start. Not so obscure.

Towards the end of this book, a couple of the writers lapse into fantasy with ‘Lord Of The Rings’ and even ‘Harry Potter’ and I do think someone should have stopped them and reminded them those are fantasy not SF. The fandom section covers a lot of issues.

Like with all books of this type, there has to be a scattershot to ensure the maximum number of readers to have something of interest for them. Saying that, I do think some subjects, like music is stretching a point and fashion not going far enough but that might be down to space. Oddly, one area we all buy but wasn’t covered in anyway was merchandise. Surely there must have been something hidden there.

Bear in mind, I’ve only touched on a few of the 76 articles and 5 interviews here because there is so much here. I suspect also you will be cross-checking to availability of some things on-line which turns the book into a useful reference with nothing I could spot as being in error.