The use of the ray-gun was essentially a trope to identify a futuristic weapon with fatal results and not use old-fashioned bullets as if they were ever used in the future. HG Wells was the first to use it, giving the Martians a deadly beam weapon in ‘War Of The Worlds’.

Over the decades, it was brought down to pistol-size, with no one really giving thought to its power source. Come to that, no one was really sure what the ‘ray’ actually was, more a move from the Martian heat beam and moving towards lasers and particle beams, like with ‘Star Trek’s phaser weapon. The problem with such a weapon as the phaser is that it disintegrates totally so there is no evidence of the kill, so no accountability or proof. More of a disintegrator weapon than a particle beam weapon. A great lesson on how to get away with murder in the future.

You would have to wonder at this with Starfleet. To stun someone with a phaser would be more akin to a taser, and there have been fatal consequences with that. This myth has been kept up throughout all their series. In reality, a residue would certainly be left, or certainly a body with a hole through it. There is no reason for it to simply disappear. After all, the beam shouldn’t actually encase the body and why doesn’t it do any damage to the wall or other surroundings around it? I mean, such a beam would bore a hole through any spaceship’s hull as there’s no sign of its range before losing power. 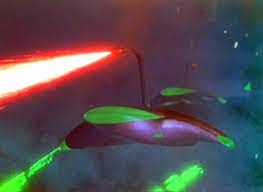 It’s these thoughts that intrigued me to write this article. The ray gun has been maligned as an all-purpose weapon when really it’s not been shown as it would really work and be an ugly weapon. There are so many directions that need to be covered. From a film or TV censor’s point of view, the lack of blood, mostly from cauterization and even a body was really a clean kill hence this myth has been kept over the years to where ‘Star Trek’ spacecraft could even destroy whole spacecraft and certainly not shown the death by vacuum if partially damaged until ‘Star Trek: First Contact’ (1996). This allowed them to have force field shields to deflect such ray blasts or the story would end rather quickly. Please note, these force shields deflected. They did not stop the beam, so you have to wonder how much damage it could do to other spacecraft and its range before dissipating. ‘Star Trek’ has always had a lot of holes in its technology, especially on questions like this that should have been asked.

Whether it’s a particle beam, a laser, or a heat beam, the ray-gun is not a nice weapon. One can only hope that its range is limited to prevent hull destruction or capable of absorbing its energy. Of course, the ideal solution would be for it to reflect the energy beam back and also kill the user. Again, hardly the best choice for readers or viewers. The dilemma is to pierce the hull and kill most of the crew, or kill the shooter by accident or deliberation.

So, let’s work from a different direction. How would you make a ray-gun and what ray could it use? Here are some options.

If you want a heat ray weapon, then the obvious choice from the electro-magnetic spectrum is infra-red. There isn’t any other choice other than increasing the amount of voltage you put into it to it can burn. Too low a power level and the most you would get is an acute sunburn. It’s the amount of energy you are pumping in, but it won’t be a quick kill.

The same would apply to a laser beam ray-gun. To be effective, it would need a tight energy-charged beam. You would bore a hole through the target and that would be the heart or brain. A wide beam would carry less energy and, again, just give you sunburn.

The real problem for any ray-gun is the power source. This has been a dilemma for any laser weapon. A laser pointer is essentially just a directional light, but would need some serious energy to penetrate a body. If you want to give it some power to burn a hole through anything, you would need a power generator to power it. A bit obvious if you’re carrying it as a concealed weapon. Even so, it wouldn’t be a big hole but a well-placed one. You certainly wouldn’t use it close up but as a sniper weapon when the victim is unsuspecting, a shot at the head or heart would be effective.

I’m a bit more skeptical about electricity firing ray-guns because electricity will earth to the ground not necessarily through a person. Look at how few people are struck by lightning in a thunderstorm. Same thing. Have some metal between you and the shooter and you wouldn’t even be hit.

If you’re considering a magnetic ray-gun, then unless the target is heavily magnetic, the most that can happen is to attract it to you or send it away. Hardly that damaging.

A particle beam would depend on atomic particles, charged ones like ions, electrons, and protons would be effective if they can be directed with enough energy. What would really happen then is the particle beam would dislodge protons and neutrons from the atoms of the material is it shot at. The object of a person wouldn’t dissolve but explode and you really wouldn’t want to be that close or you would suffer damage yourself.

Any radiation-emitting weapon needs time to build up a charge before firing so you can hardly have a quick gun battle. If anything, it gives you plenty of time to get out of the way as the ray goes from a light on your chest to full destructive power. You would have to ask why SF film directors have never thought of this to prolong a battle. It isn’t as though the laser sight isn’t shown using it, albeit with low power.

If I was going to do something creative to do with a ray-gun then it would be to give a dose of radiation to the victim. It might not kill immediately, but you would certainly need to have some immediate treatment for radiation burns and sickness or know your life expediency isn’t long without treatment. It might not look so dynamic, but it would be deadly.

I should also point out that such weapons give off heat, mainly from the power source, and you would need hand protection and at least lead-lining for any radiation discharge protection. Remember all that weight and how steady your hand can be to get a clean shot. If you miss the killer aim, you are just going to do some serious damage to your victim or anyone nearby.

Would we ever want a real ray-gun? Assuming we can sort out the power source problem. We do actually have a couple. There are some high-powered laser beams now, but they are more tank-sized but still a tight beam. Even like that, the results are the same as the supposed pistol size. A small hole that needs a lot of targeting to ensure you hit the right target. You certainly couldn’t use it like Goldfinger to carve a bigger hole. It would take too long and anyone with a mirror could reflect it back to the source.

I should also point out that using a particle beam as a means of propulsion is not effective. Apart from the lack of power, it has nothing to bounce off of. Solar-sail spacecraft can go faster, simply because its bouncing propelled photons off its sails although this is likely to be less the further from the star, although kept going by the first law of motion.

As with all weapons, we should remember that just because ray-guns might become more sophisticated and even sanitised in how they kill, they are likely to just as if not more dangerous. The results are equally the same. It might be wise to consider some other form of weapon than a ray-gun for future use. After all, sooner than later, such weapons would move from military or even police work into criminal uses, and would you really want them having ray-guns and no proof of accountability? Of course, there are bullets, but I wonder if they would ever catch on.