With a title like ‘Policing The Monstrous’, pay attention to the sub-title, ‘Essays On The Supernatural Crime Procedural’. How do the police and other agencies handle crimes with a supernatural element? That already lays some ground rules for selection and the eleven writers here have chosen across the board, although not everyone.

I mean, you won’t find the American TV 2001 series ‘Special Unit 2’ here, which I would have thought would surely have qualified better than ‘Twin Peaks’. I suspect my mind will wander over other series that should have been considered as I read this book. If nothing else, it’ll show how big this subject is. It would also be interesting if they created a Science Fiction version of this book just to balance things out. 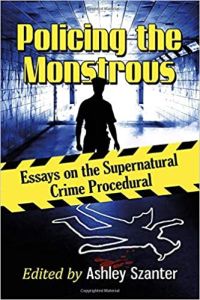 What series are being covered: ‘The X-Files’, ‘Twin Peaks’, Sherlock Holmes, ‘Supernatural’, ‘Forever Knight’, ‘Moonlight’, ‘True Detectives’, ‘Pushing Daisies’, ‘Constantine’ and two pieces on ‘Lucifer’. OK, highlights that might dim. There are some mentions of other shows but not in a big way.

Obviously, ‘The X-Files’ would be covered, even if it crosses both genres. Adam James Smith concentrates on Fox Mulder’s motivations far more than his applying FBI procedure. Accepting that there is an unusual element that might range from a supposedly supernatural or alien threat and building up a case of proof would have made more sense to the book title. In the series, Mulder and Scully certainly did this and, in a 48 minute show, we didn’t see many of the dead ends that they dismissed and only focused on the person(s)/creature(s) who did it. Then again, that’s true of any police show, unless arresting or convicting the wrong person is the story. If it had to reflect real life, you would see any police unit dealing with over one case at the same time as well, and that rarely happens.

I’m not entirely sure if Sherlock Holmes should be here, although Michelle D. Miranda proposes the detective’s attention to detail is almost supernatural. From a Victorian melodrama pov, my analysis is that these and other detective stories didn’t have to worry about red herring distractions and anyone interviewed, other than the villain, spoke the truth which must have made life easier for solving.

I’m not sure if I would dispute writer Teresa Cutler-Broyles that ‘Forever Knight’ was the first detective vampire series, even if its appearance in the UK was sporadic and never saw it. However, it started making me thinking what series have they over-looked. At the end of Simon Bacon’s look at ‘Moonlight’, there is a reference note to UK’s Channel 4 1998 series ‘Ultraviolet’ which surely qualified to be here as they track down their night creatures’ activities. The fact the single note about it being Stephen Moyer playing a vampire detective, clearly meant they hadn’t watched it because his character Jack Beresford was a corrupt cop opting for becoming a Code V/vampire to avoid arrest and literally dusted from the first to the last episode resurrection. However, from a police procedural show with attitude, it should have been covered. It isn’t as though the writers here weren’t from across the world and it not being out on DVD.

Therein lies the key problem. Many of the examples given are themselves similar to the creatures they are pursuing, so I doubt if many if any of them went to any official training academy, so what would they know about police procedurals as consultants.

In many respects, only a couple of the writers touch on proper procedurals of evidence and identifying the culprits but not go beyond arrests. Without that being considered, how do we know which ones are doing things correctly and how many are stepping over the line, a person/creature’s rights and making the case unsafe to a court of law. The rights issue should at least have been covered.

If this is a lacking in these shows, then these writers have to say that and maybe the next generation of these types of shows will do more to correct this problem. As it stands, just because you look monstrous, it assumes you’re guilty of a crime. Even ‘The X-Files’ had a few cases where that was clearly not the case. It also suggests that we might be unwittingly setting up the wrong kinds of prejudices based on appearance, something that we see in our own reality, then go for evidence first.

There’s nothing wrong with the book per se, but I wish they had explored further.