‘Please Do Not Ask For Mercy As A Refusal Often Offends’ must be the longest book title of any book I have reviewed. I picked it up after reading and being impressed by one of Paul Basset Davies short stories. I’m glad I did as it’s an odd tale told well. 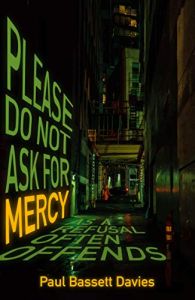 The setting for the story is a future Earth where the rise in sea level has left one land mass inhabited by an odd but human society. It’s a bit like western civilisation in the 1930s but with some serious quirks. Firstly, the official Church is in control of most aspects of its inhabitant’s life and moral code. If you get on the wrong side of these people, then a public execution might be waiting for you. By the way, public executions are seen as a type of public entertainment. Something to take the kids along to.

The book opens with a public execution of a man guilty of blasphemy and heresy which nicely sets depicts the local environment. Unfortunately, the wife of the executed criminal is herself killed a day later. All the evidence clearly points to the teenage daughter, Sheba, as the killer although the only evidence is that she packed a bag, left home and subsequently disappeared.

Detective Kilroy is assigned the case which is good as he’s one of the main characters in this story. He’s a handsome chap who’s committed to his policework and shares his bachelor flat with an gray parrot called Creek. He does have a platonic friendship with a lady called Curtis who outwardly appears to be working in insurance is really working for the state’s surveillance services. Kilroy is aware of this but it’s something they don’t speak of.

At the time of the story, the state is undergoing a social upheaval with the Church clamping down on blasphemy, heresy and anything else they don’t like the look of. There’s a pressure building in the general population which is going to explode at some point. The teenage girl Sheba might just be the catalyst which is why everyone is looking for her.

There’s actually a lot more going on than first appears as events are being influenced by agents external to the state. At the time of the collapse of the Earth’s eco-system, some people left the planet for other colonies. These departees continued to monitor the remained during the hundreds of years since they left. Yes, of course, there’s a policy of non-interference but there’s always a but.

It’s not long before Kilroy and Curtis find themselves caught between the state and the rebels looking to overthrow the Church and seek the truth. There are car chases, gun fights, betrayals, assassinations and lots of surprises. It’s what you would expect from a society edging closer and closer to a revolution.

This is a book I really enjoyed reading. The characters are entertaining and there are some wonderfully comic moments, but this is not a comical story. It’s actually hard to describe although there are attempts by Stephen King, Jeremy Hardy and Jack Dee on the back of the paperback I was reading. They all describe it as funny amongst other things while I would describe it as a well-written story with a few funny bits.

One thing which did make me laugh is the name of the two deities: Upstairs Mam and Dad. There is also the Blessed Shadbold who pops up now and then. At the end of the book, you will find the ‘Landmass Gospel’, which is split into four brief chapters. As per the rest of the book it is well-written with some funny bits and worth a read.

The story does have an ending and then again it doesn’t. There are a few loose ends which could easily be picked up in new novels to continue the tale. This is something I really do hope Paul Bassett Davies does. For now you will have to treat yourself to the book with the longest title of any that I have reviewed.