Abingdon-based Ben Jeapes, once known for his late lamented Big Engine small press, and then as a Young Adult (YA) author of books such as The Xenocide Mission (2002) and The New World Order (2004), has now broken into the world of adult fiction and an excellent debut it is, too. Basically, it is the story of two brothers. Originally, it was three but one brother, Felipe, makes an early departure, though he remains an important presence. La Nueva Temporada is Earth’s first and so far only colony world. It was chosen because it appeared to be Earth-like, which it is, except that it proves to be in the grip of an Ice Age. Only a narrow strip of it is habitable by humans. It was reached by the only starship, Phoenicia, powered by a ‘Matter Annihilation Drive’ and took forty years to make the trip, though the drive would only thrust for ten before shutting down, its crew and colonists in slow sleep. Yet Earth has a wormhole, through which people and objects can pass, but not objects as huge as Phoenicia. So the starship carried a wormhole terminus, which when opened allowed traffic back and forth daily. Since the bulk of the book depends upon it, I don’t think I’m giving too much away by saying that without warning the wormhole explodes with disastrous results.

Most of the story centres around brother Alejandro (Alex) Mateo and, later, his younger brother Joaquin (Quin). Their family is one of the leading, one might almost say ruling, classes on La Nueva Temporada and they are hijos (‘hee-ho’s’) because they were the first to arrive on the planet. Alex wants only to stay and take an active part in the terraforming of his world until it begins to warm up and humanity can expand across its surface. But the wormhole catastrophe puts an end to that and he is forced to make the long, slow journey back to Earth in order to establish a new wormhole terminus. But when he gets there, he finds that not everyone on Earth agrees with the plan to reopen it.

It is his much younger brother, Quin, who hates La Nueva Temporada and, everyone on it, who has to stay behind and watch his world collapse around him, only to become its ultimate saviour. Quin was born just as the wormhole collapsed, so has never known his world as it was or should be. We learn about his life in a series of jumps, from a few years to decades, and his childhood and teen years are very well handled, shaping him as a future adult. So are the way that society and governments evolve on the two worlds. Yet Jeapes doesn’t go into long passages of exposition or explanation, allowing the story to evolve at its own pace. Likewise the science: we know that the wormholes take advantage of quantum physics, but they have just become an accepted part of this future history.

The story ends in a way that makes it clear there is plenty of room for a sequel. The characters are real and you care about them and the worlds are believable, too. This is one of the best hard SF novels I have read in a long time and it is refreshing to find a ‘new’ author who can handle the subject so capably. In my book – and in his! – Jeapes is well able to join the ranks of Hamilton, Robinson and Reynolds. I look forward to his future output (no pun intended). Highly recommended.

As an artist I cannot resist a mention of the cover, which on the paperback is by Dominic Harman. For once, it is a good old-fashioned illustrative cover. Indeed, those sharp, pointy mountains would be at home on a cover from the fifties! It shows signs of having been painted very quickly, yet it serves its purpose in attracting the eye. Which is what a cover is supposed to be all about and other publishers would do well to remember this. 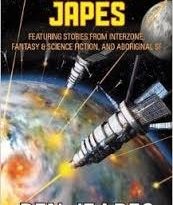