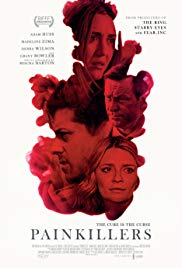 Director Roxy Shih’s (‘The Tribe’) psychological thriller ‘Painkillers’ is a horror showcase of a different kind. The decorated demons and lingering despair do not emerge from behind a shady-minded wall or appear in the freakish form of an apparition looking for spooky-minded payback. Shih’s fright fable is effectively embedded in the tortured psyche. The sickness and sinister forces at hand teeter on the madness of one’s mental mind. Horror within the weakened soul and body can make for decent drama and twitchy decadence.

In any event, ‘Painkillers’ certainly does not reinvent the wheel when it comes to the physicality or emotional presence of pain and suffering. Nevertheless, Shih’s neurosis-induced narrative does register with its subtle ghoulish gumption. For what it is worth, ‘Painkillers’ definitely works on the nerves and reinforces a certain kind of fixation that is more than imagined or hallucinatory.

Sure, the premise features the familiar conventions of a vampire movie, albeit a sophisticated one that does not necessarily tread heavily in the traditional realm of blood-sucking banality. Screenwriter Giles Daoust (‘Artefacts’) dutifully blends together a psycho/horror confection that is contemplative in its probing presentation of affliction and addiction. Daoust is to be applauded for taking on the challenging task of combining chronic pain/mental strain with vampiric overtones. After all, most horror-oriented entertainment does not always have to show its supernatural card for creepy consideration.

Victimised physician John Clarke (Adam Huss) is plagued with a lot of complex issues, to say the least. The good doctor, brilliant as a committed surgeon on the operating table, is dogged by tremendous guilt in the aftermath of his son’s (Tate Birchmore) death in a tragic car accident. Apparently, John had been rather playful and irresponsible with his child in the vehicle causing the doomsday result that would spiral into a depression state for him and his wife Chloe (Madeline Zima).

However, Dr. Clarke is also facing another major crisis that is weighing on him because he has this medical condition where sucking and/or drinking his own blood reduces whatever intense pain ails him. Of course, this bewildering discovery is after Clarke wakes up from his coma only to discover his son’s awful passing at the hazardous hands of his aforementioned foolishness. Naturally feeling devastated and distraught while attending his boy’s funeral, Clarke stumbles upon a mystery man named Morris (Grant Bowler) whose reassurance about containing his disturbing blood-craving habits to alleviate his mental stresses and intense physical discomfort becomes a source for guidance. Morris insists that Clarke must contend with the vampire-like symptoms while figuring out his quest for balancing the evil within. Still, Dr. John Clarke is a full-fledged plasma maniac that feeds his compulsion for bloody indulgences. Whether slurping the blood from his own body parts or snacking on available blood bags, it is clear concerning the damaged doctor’s answer for self-preservation, relying on his unsavory bloody binges to ease his ominous aches and pains.

Morris is not the only safety net that Clarke depends on to diagnose his delirious shakes, shivers, and shocks. His personal medical consultant, Gail Konrad (Debra Wilson from the old ‘MadTV’ late-night sketch variety show), is puzzled by Clarke’s alarming trembling and overall blistering illness.  She detects no physical ailments but, definitely, Clarke is having his brutal battles with the continuous unsettling discomfort. The additional grief and heartbroken feelings that overcome John and Chloe’s immensely saddened predicament almost translates into how the audience taps into the insurmountable disillusionment and disdain that renders crippling helplessness of sorts.

‘Painkillers’ has more than its share of gripping moments. Huss makes for a convincing sickly leading man whose flinching physical agony sells the mystique behind the shadowy vampire myth that the story tells with a dubious distinction. Zima also carries the sullen load efficiently as a broken soul in a different kind of manner that distinguishes her detachment from Huss’ embattled sufferer. The taste and tendencies for human blood may be considered as pouring it on thick for this plasma-seeking platform. Thankfully, Huss’ bloodshot addict is deemed as walking wounded and it works within the skirmish frame of this fidgety fable.

Unfortunately, ‘Painkillers’ does not escape some fingered criticism. Mischa Barton, one of a couple of recognizable faces in this splatters-that-matters drama, is presented as a tease for her brief appearance as a sacrificial lamb for a vampire-induced chomp on the slashed wrist during her clubbing excursion. One is not quite certain as to why Barton’s eventual demise in the movie’s opening sequence benefited anybody, particular Barton’s admirers that figured she would show more instrumental involvement in this serviceable project. Wilson’s medical advisor could have used some extra screen time to develop her characterisation that could have been a nice contrast to Strong’s philosophical Morris that has Clarke’s attentive ear in check.

Although ‘Painkillers’ could have been fleshed out more in terms of its suspenseful hold, the film still is ambitious in its quest to mix and match its suggestive vampire themes with the sluggish state of physical/mental incapacities. Sometimes horror entities can emphasise experimentation in its bid to blend corrosive components and see where they mesh in macabre unity. One really would not go wrong in sinking their fangs into this observant blood-stained gem of confusion and conflict. 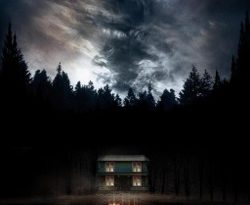 The Hallow (a film review by Frank Ochieng) 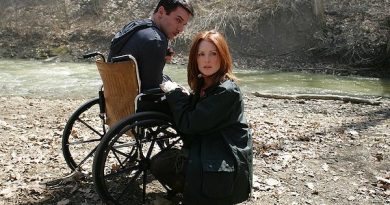 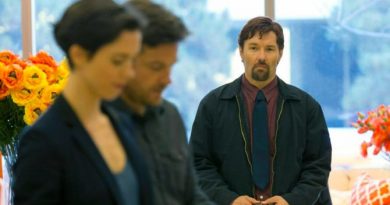