Who would bother to make a graphic novel about English political writer George Orwell? The French, obviously. They are much more political. While the British have muddled through with a constitutional monarchy since 1688, they are on their Fifth Republic. They take both politics and comic strips much more seriously than their neighbours on the other side of ‘La Manche’ and now those friendly folks at SelfMadeHero have provided a handy English translation of ‘Orwell’. 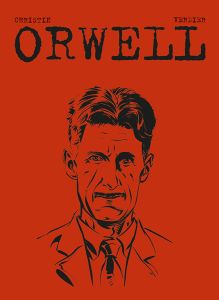 Written by Pierre Christin and charmingly illustrated by Sébastien Verdier and others, including Juanjo Guarnido, Enki Bilal, Manu Larcenet, Blutch and André Juillard, the book tells the life story of Eric Blair. Born in Bengal, in 1903, where his father worked in the colonial government, Eric grew up in Oxfordshire as part of a ‘lower upper-middle class family’. His father stayed in India until 1912 and mother was largely absent with her busy social life. I guess there was a nanny.

Young Eric loved nature and animals and the Science Fiction of H.G. Wells. Too soon, he was sent off to Saint Cyprian’s, a prep school in Eastbourne where the headmaster beat him with a riding crop because of his bed wetting. It stopped. On to Eton, where Eric was good at sport and picked up a posh accent.

Unlike most of his classmates, Blair didn’t go on to university, instead joining the imperial police in Burma where he famously shot an elephant. This is graphically illustrated here. Sick of imperialism, he returned to England and wrote ‘Burmese Days’, the first novel. Unemployed, he was down and out in Paris and London for a while. Blair wrote ‘Keep The Aspidistra Flying, but couldn’t get his novels published. He chose the pen name George Orwell based on the river where he loved to fish and the patron saint of England. Orwell wrote ‘The Road To Wigan Pier’ about the hard life up north.

George Orwell loved England but hated the bourgeois of London with their trivial concerns and the Labour Party politicians who were now capitalist lackeys. He disliked mass production, mechanisation, urbanisation, tinned food and the radio but loved England, despite all these things. He loved it so much he went to Spain to fight fascists, leaving a wife behind. On his return, Orwell wrote numerous articles, essays and reviews then published his great works.

Orwell’s fame is mainly based on two books, ‘Animal Farm’ and ‘1984’, the former a fable, or fantasy and the latter Science Fiction of a kind, which justifies his biography being on a genre website. ‘1984’ was full of ideas about how a totalitarian regime might change language itself to keep power. ‘Animal Farm’ is a short, sharp satire of Stalin’s Russia and much more readable. Both were on the school curriculum when I was a lad. I don’t know if they are now.

I like Orwell’s work but not the fiction, except ‘Animal Farm’. I agree with Asimov about ‘1984’. It’s slow and turgid. You’re better off watching the film starring John Hurt and Richard Burton. But Orwell’s non-fiction works provide a penetrating, lucid insight into the world he knew and excellent advice on writing plain English. This book features a few extracts which will give readers a taste of his prose and there’s a free essay online about boys weeklies. https://www.orwellfoundation.com/the-orwell-foundation/orwell/essays-and-other-works/boys-weeklies/

You can learn the basic facts of George Orwell’s life in ten minutes on Wikipedia, so why bother reading an illustrated version? I’ll tell you why, because it’s great that’s why! Show, don’t tell, they say and this combination of captions, word balloons and pictures does a terrific job of showing you how life was in a very different age. The black and white illustrations of the English countryside, London, Paris, Barcelona and Orwell’s little cottage are worth several thousand words.

The style is somewhat like that of old English comics from my childhood. Colour is used here and there, mainly to illustrate scenes from Orwell’s works. One amusing panel shows him reading an issue of ‘Action Comics’ with Superman on the cover as research for an essay. Orwell hated it. Would he be pleased to star in a graphic novel? Maybe not, but I like it.