The idea of using super-powered people as metaphors for those outside normal society obviously isn’t new, being the basic idea of ‘The X-Men’ comics. Similarly, using comics to shine a light on social issues goes all the way back to ‘Spider-Man’ and was always something of a hallmark of ‘Green Arrow’. So what writer Devin Grayson is doing here with ‘OMNI: Volume 1: The Doctor Is In’ is entirely within that tradition, but this time focusing on race relations and social justice in the Trump era, covering everything from police brutality to the locking up of child-immigrants. 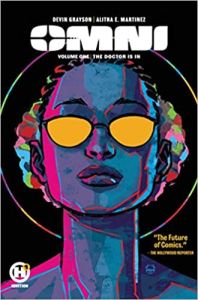 Long story short, she does a great job. While there’s a risk that something as topical as this could become preachy or pedantic, Grayson manages to keep things entertaining throughout. Of course, as the first in a series, this particular volume of ‘OMNI’ has to do some heavy-lifting in terms of setting the scene and explaining how the protagonists’ powers work. This is done with an appeal to the theory of multiple intelligences, which supposes that different people have their brains wired in one of nine basic ways, such as verbal-linguistic and bodily-kinaesthetic.

But a few people have these developed to an exceptional degree, becoming the ‘ignited’, transforming into the next step in human evolution. One such person is the protagonist, Dr. Cecelia Cobbina, nominally a surgeon working with Medecins Sans Frontieres, but also travelling the world on behalf of the OMNI organisation to find and protect those passing through ‘ignition’. As she does so, she has to deal with some of the problems baked into modern society.

An early scene has a young black man stopped by a trio of white cops. He realises that to the cops, he looks much like any other young black guy, in this case, the perpetrators of a robbery that took place earlier that day. Things quickly go bad, a cop fires his gun and, as one of the ‘ignited’, the young man simply lets the bullet pass through his body harmlessly. The cop standing behind him isn’t so lucky, of course, and takes the bullet straight to the chest. Cobbina gets to the police station and has to deal with the situation here as best she can.

The cop who fired the gun is furious that his partner is in hospital and in fact tries to punch the young man but, as before, the blow simply passes through his body.

For sure scenes like this feel a little like wish-fulfilment on the part of those who in our world find themselves marginalised. What if the cops literally felt the harm they dish out on young black men? What if the people imprisoning the children of illegal immigrants suddenly found themselves trapped and scared? What if the women being sexually assaulted could return that violence tenfold?

What saves ‘OMNI’ from simply being an angry catalogue of score-settling is the wise way in which Grayson pulls back from mere retribution. She uses the instances of the ‘ignited’ using their powers to show the dangers of following the path of force rather than making it the goal. Cobbina and her allies are trying to save everybody and even the rogue fire-starter she’s trying to track down seems to have an ethical core, despite her anger. The cliff-hanger ending also makes it clear that there’s a more pressing threat for the OMNI organisation to deal with than a few angry super-humans.

One of the cooler touches is the use of a metafictional comic strip within the book, the ‘Adventures Of Dr. Cecelia C’ by one of her colleagues, Mae Walters. Done in the style of the Sunday comics, these offer up an alternative viewpoint to the one we see following Cobbina directly while acting as a sort of ‘story so far…’ summary for each chapter. Overall then, this collection makes for a very decent and thought-provoking read with some solid artwork behind it. 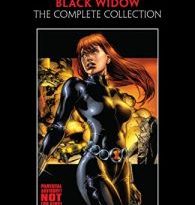